Zeta-Jones back in treatment for bipolar disorder | Inquirer Entertainment

Zeta-Jones back in treatment for bipolar disorder 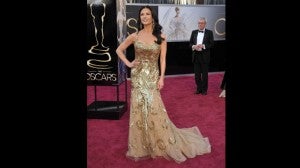 “Catherine has proactively checked into a health care facility,” her spokeswoman Sarah Fuller said in an email to AFP.

“Previously Catherine has said that she is committed to periodic care in order to manage her health in an optimum manner,” Fuller added.

Zeta-Jones started a 30-day treatment on Monday, according to entertainment website TMZ.

The actress said in 2011 that she has bipolar disorder, or manic depression, a mood disorder in which euphoric states can alternate with severe depression.

The Welsh actress, 43, won an Academy Award in 2003 for her supporting role in “Chicago” and has appeared in films such as “Traffic” and “Ocean’s Twelve.”