Club Haze grand launch in May with Paul Oakenfold 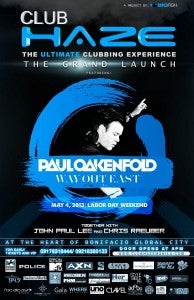 MANILA, Philippines – Two pioneers in the electronic music industry collide on May 4 in the newest hotspot in Fort Strip, Bonifacio Global City. BigFish, the international dance party producer who started it all, will be bringing you Paul Oakenfold, world renowned legend of electronic music for the first time in the Philippines at the grand launch of Club Haze.

Oakenfold, a three-time Grammy nominee, has elevated and shaped an entire genre and remains one of the leading forces in the global music scene today.

Experience the best state of the art sound system combined with the ultimate lighting and visual shows at Club Haze as Oakenfold, who has produced for U2, Madonna, and the Happy Mondays, as well as three albums of his own, provides the beat.

Oakenfold has also remixed for Michael Jackson, The Rolling Stones, Justin Timberlake, and Bruno Mars to name a few. His talent has also conquered Hollywood by creating breathtaking film scores and cues for a long list of Hollywood blockbusters, including The Bourne Identity, Matrix Reloaded, Shrek 2, Swordfish and Collateral.

Oakenfold will be playing together with the two great BigFish resident DJs who never fail to hype up the crowd – Chris Raeuber and John Paul Lee.