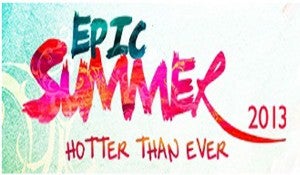 MANILA, Philippines – Nineteen top Filipino bands converge for 8 days of rock concerts at The Plaza- Newport Mall in Resorts World Manila. As part of the summer feast of the country’s first integrated resort dubbed as “Epic Summer”, Sandwich, The Dawn, Spongecola, and Itchyworms are among the biggest acts set to entertain the crowd for free.

Sundown Sounds began with Tropical Depression, Barbie Almalbis, and Kitchie Nadal last April 15, back-to-back with Urbandub and the Ely Buendia-led band Pupil on April 16. Come Monday next week, Soul Republic and Rocksteddy are scheduled to perform followed by Amistad and Jett Pangan’s The Dawn on April 23.

Moonstar 88 and Sandwich will continue the music feast on April 26, followed by Join the Club and Itchyworms on April 27. Continuing the fun on April 28 are Save Me Hollywood and Spongecola while Tanya Markova and Up Dharma Down will provide summer tunes on April 29. Sundown Sounds will culminate with Indio I and Franco on April 30.

Aside from the big bands, exciting prizes like free stays at Remington Hotel and dining vouchers consumable at world-class restaurants in Resorts World Manila are also being given away to random members of the audience during the concerts.

Other exciting summer events and promos at Resorts World Manila include the ‘Millionaires’ Month’ where 21 new millionaires are scheduled to be named this April. Other huge raffle promos are also ongoing like the Epic Summer Raffle Overdrive where two BMW Convertibles are set to be raffled off and the Epic Point Race which offers 742 gadgets, appliances and scooters to be redeemed by members who are earning points.

The most-watched musical ‘The King and I’ will continue its run for Epic Summer. New shows are also unveiled by Resorts World Manila in the centerpiece lounge of its gaming area, Bar 360. Internationally celebrated acrobats, stunt artists and gymnasts will join some of the Philippines’ best vocalists for an extravaganza of stunts and songs in “Legends” and “Rock of 80’s”.