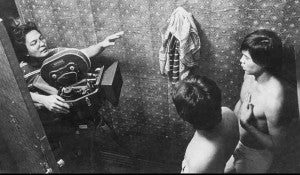 Bembol Roco candidly recounted that he was not the first choice to play Julio Madiaga, the hapless hero in Lino Brocka’s 1975 film, “Maynila sa mga Kuko ng Liwanag (Manila in the Claws of Light).”

The film is currently being restored digitally by the Film Development Council of the Philippines (FDCP) in tandem with the World Cinema Foundation (WCF), chaired by Oscar-winning filmmaker Martin Scorsese. FDCP has announced that the new “Maynila” will have a world premiere at the Cannes International Film Festival in May.

“Lino had shot several scenes with Jay Ilagan as Julio,” Roco told the Inquirer. “But when Lino and the producers viewed the rushes, they thought Jay was too chubby.”

Madiaga, after all, was supposed to be a probinsiyano (rural lad) who encounters all sorts of hardships in the big bad city.

Roco previously had a small role in the Brocka movie “Tatlo, Dalawa, Isa” (in the episode that top-billed Ilagan) and costarred with the director in the Peta (Philippine Educational Theater Association) play, “Hanggang Dito na Lamang at Maraming Salamat.”

He related, “We toured the play, and we had just gotten back from Mindanao when I got the call about ‘Maynila’ from Lino.”

He was ecstatic, naturally,  but fear eventually set in.

“I was very insecure. But it worked in my favor because Lino wanted rawness.”

Originally, he was supposed to play a minor role, as a callboy. But the instant promotion meant the 22-year-old neophyte had to carry an entire movie on his slim shoulders. Plus, he was practically in every scene.

“We had to shoot in different places,” he said. “The provincial scenes were shot in a beach area in Batangas, but the city scenes were far from idyllic. “We shot in the slums of Tondo, in Smokey Mountain—the dump site. It was exhausting, but I savored every moment.”

It was an eye-opener, too, he owned up. “Lino captured the harsh realities in the country in the 1970s.”

The director took Roco and other actors to an actual construction site in Quezon City, where the Bureau of Internal Revenue building now stands.

“Lino insisted on shooting in real places,” he said. “He wanted us to get immersed in the construction site. He encouraged us. “He also gave me one of his old polo shirts. He said it was his favorite.”

Roco considered Brocka a “second father.” “I could always run to him when I had problems about work or even my personal life,” he said. “He was frank, open-minded and always objective. He wouldn’t think twice about reprimanding me if he didn’t agree with my impulsive decisions.”

As a filmmaker, Brocka was “the best in motivating actors,” Roco said. Like other so-called Brocka babies, he benefited greatly from “acting workshops” that the acclaimed director gave right on the set.

“He knew what he wanted from actors but knew their limits, too. He would pull me aside and carefully explain each scene. He would tell me: ‘What would it be like if you lost the woman 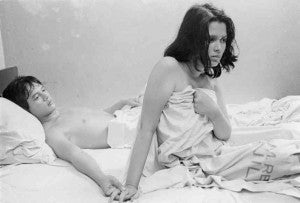 THE ACTOR recalls that he and Hilda Koronel were sweating bullets in the dingy motel room, but that his costar remained “luminous.”

Roco recalled that, when it was time to shoot a pivotal scene in a decrepit motel along Avenida, Brocka guided him and costar Hilda Koronel intently. “We were sweating profusely because it was hot and the room was cramped,” he remembered. “But it was Hilda’s moment to shine.”

According to urban lore, Koronel had quarreled with Ilagan, her real-life boyfriend, the night before the motel scene was shot.

For Brocka, the personal drama was propitious, as the director was able to harness Koronel’s emotions fully in that dramatic scene, Roco noted.

Among all the filmmakers he had worked with in his 37-year-career, Brocka stood out, the actor said. “Lino was a genius, a master storyteller.”

As such, Roco expressed elation that Scorsese’s WCF, the movie’s producer and cinematographer Mike de Leon, and the FDCP decided to digitally restore “Maynila.”

“I’m honored that Scorsese, a respected director in Hollywood, considered it an important film,” Roco said. “Today’s young people should be able to watch ‘Maynila.’”

He cited three reasons for this: “The social problems Lino tackled still exist today,” he said. Moreover, he added, the film has “historical significance because the Manila in the film has changed a lot. For example, Binondo looks completely different now.” On top of this, he said, Manila’s famous neon lights (the film’s titular “claws”) are no more, having been replaced by billboards.

He pointed out that “Maynila” is the only Filipino film in the book “1,001 Movies You Must See Before You Die.” “It’s heartening that our film continues to be appreciated… then and now,” he said.

During its premiere in 1975, the film was given a rousing ovation in the theater, Roco said. “It was received well at the tills, too. It proved that a movie could be a critical and commercial success at the same time.”