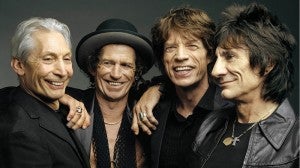 This 2005 file photo, originally supplied by the Rolling Stones, shows the group, from left, Charlie Watts, Keith Richards, Mick Jagger, and Ron Wood posing during a photo shoot. The band said Wednesday, April 3, 2013, their “50 and Counting” tour will kick off in Los Angeles at the Staples Center. The date will be announced later. The tour will also visit San Jose, Calif.; Las Vegas; Anaheim, Calif.; Toronto; Chicago; and Boston. The tour wraps on June 18 in Philadelphia. The band will also headline the Glastonbury Festival on June 29 and will perform at London’s Hyde Park on July 6. AP FILE PHOTO/The Rolling Stones, Mark Seliger

NEW YORK — If you’re upset that the Rolling Stones won’t be coming to your city on their upcoming nine-date tour, don’t be too stressed — the rockers say more dates may be added.

“Normally when you announce a tour like this, you announce part of it, you leave it to be, you see what happens, you might do a date here and another date there. You don’t want to be completely hand fast, so you do leave some dates in between,” said Mick Jagger in an interview Thursday. “So we’ll see what happens.”

The Stones announced this week that they’ll kick off their “50 and Counting” tour in Los Angeles; the date will be announced later. The second show is in Oakland, Calif., on May 5. They’ll also visit Las Vegas, Toronto, Chicago and Boston, and wrap in Philadelphia on June 18.

The announcement comes months after the foursome performed a sold-out, five-city stint in New York, New Jersey and London.

Jagger called those shows a test.

“We just said, ‘Let’s do these five shows before Christmas and see how it goes and see if we enjoy it, see if the audience seems to have a good time, and if that works, then we’ll try to see if we’ll do more,'” he said. “We still wanted to keep it kind of limited. We didn’t want to have that yawning (tour) of hundreds of shows lined up for the next 18 months. I just thought it would be good if we booked a small tour, and then, you know, if we want to do more, we’ll do more.”

The Stones have at least three days in between tour stops, a sign that more shows may be added. Or the time could be used for rest.

“I think it’s a little bit of both,” Keith Richards said in a separate interview Thursday. “The band wants to pace themselves, but at the same time … I guess what’s been announced is the bare-bones and we will play it by ear from there.”

Jagger, 69, said he’s getting older — and performing can be tough.

“I just have to train a lot and keep really fit. I want to do these moves, but I can’t do them because if I did, I’d probably screw up,” he said, laughing. “You just got to do what’s within your capabilities. I don’t want it to look wrong, so I’m going to stay within my boundaries.”

The Stones’ recent tour featured special guests such as Bruce Springsteen and Lady Gaga, and there could be more surprises onstage.

“I have a feeling there’s more openness about playing it the same way,” Richards said. “I can’t name names or make promises, but that area of the show is open.”

The veteran band, which also includes Charlie Watts and Ronnie Wood, will headline the Glastonbury Festival on June 29 and will perform at London’s Hyde Park on July 6. Former bandmate Mick Taylor, a member of the Stones from 1969 through 1974, will be a special guest throughout the tour.

“I realized how much, not just (how I) myself have missed it, but I could tell from the other guys. They don’t say so, but I can tell,” Richards said of performing together. “It’s what we’re good at.”

Read Next
Love lucks out
EDITORS' PICK
High inflation: Your P1 is now worth only 87 centavos
Geek out at TOYCON 2022 powered by Smart Signature
Unemployment rate up to 6% in May
UK’s Boris Johnson will resign, BBC reports
High-risk pregnancy: Reducing your risk is in your hands
House energy committee chair Arroyo bats for cheap electricity
MOST READ
Suspect in grisly killing of missing woman in Bulacan arrested
Kim Atienza’s daughter flaunts bikini body in response to critics of her ‘revealing photos’
Cop slain in Isabela ambush
FDA probes popular Filipino noodle brand for ‘high level of ethylene oxide’
Don't miss out on the latest news and information.