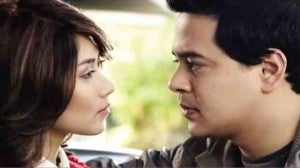 “It takes a man and a woman,” the third installment of the John Lloyd Cruz-Sarah Geronimo love team’s long-playing  rom-com, is currently unfolding on local movie screens, so the tandem’s avid fans are turning out in droves to see how the tale will finally wind up. Naturally, a Happy Ending is fully expected—and delivered—so, everybody’s happy!

On point of filmmaking, however, Cathy Garcia-Molina’s film is less than an overwhelming treat, and is sometimes even a puzzlement. It does start out well, with an efficient dovetailing of events detailing how its resident lovebirds broke up because she  couldn’t be at his side when his father passed away, so he turned to Isabelle Daza’s more “available” character instead—thus breaking Sarah’s character’s heart and transforming her into a cynical and exceedingly tough cookie!

So, when his family brought her back from the States to co-edit a swanky magazine with him, the two ex-sweethearts were at each other’s necks in no time at all—and it certainly wasn’t because they wanted to plant love bites on one another!

Sadly, however, the movie starts to lose its focus soon after, primarily because Sarah’s new “tough” persona is so obviously put-on. We long to see the vulnerable heart of this wounded woman, but we mostly get just “smartypants” delivery of ack-ack dialogue, posing here and prattling there, so we eventually stop caring.

As for John Lloyd, his depiction is deeper and more vulnerable, but plotting coincidences and other exigencies soon also weaken it.

The leads’ portrayals aside, what compromises the movie to a grievous degree is its presumption that we are all that interested in the magazine trade’s inner workings and trappings, which it reveals in excessive detail, thus expending too much screen time on generally irrelevant subplotting.

To be sure, the film wins thematic points with its emphasis on the importance of forgiveness, of really moving on—so, when the constantly bickering ex-lovers finally face up to their hurts and/or guilt, the heretofore sluggish and unfocused drama finally hits viewers where they live, hurt and love. —Unfortunately, it’s too little, too late to save the film.