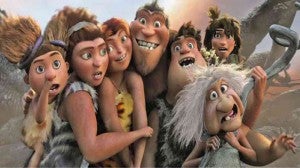 “THE CROODS.” From the pitch-black darkness of fear and trembling—into the light!

2012 was a bad year for animated feature films, so we’re happy that Dreamworks’ latest production, “The Croods,” has turned out to be a viewing treat. —It’s about time!

Its advantage over last year’s crop is the fact that it isn’t just a series of weird situations and characters edited together for maximum oomph!  and pow!, but it has an over-arching thematic point that keeps viewers interested and involved, from start to finish.

The Croods are a nuclear family of cavemen who have managed to survive the many dangers of prehistoric existence, while their neighbors have all been exterminated by huge predators and natural calamities. The Croods’ survival technique? The head of the family’s insistence that they stay inside their cave at night, come what may!

The gambit works well, but it’s made the family timorous and afraid of the dark and the many other challenges out there, and the female teenager in the family, humankind’s first teen rebel, eventually refuses to put up with such restrictions!

She dares to venture out of the cave at night, meets a new friend with an inventive streak (he conjures up mankind’s very first pair of shoes!), and many new, exciting and terrifying possibilities present themselves!

Mr. and Mrs. Crood are outraged, but it turns out that their rebellious daughter’s disobedience has saved their family from perdition. Nature is acting up, epoch-ending cataclysms are coming one after another, and it’s their daughter’s inventive friend who makes it possible for them to move to a safer part of the globe to create a brave, new world!

The Croods’ voyage into the terrifying but ultimately liberating unknown is made even more memorable by the production’s digital magicians, who create fascinating creatures and adventures that delight the eye and inspire viewers’ imagination. Each of the Croods is well-characterized, so we relate to them and their adventures in a personal way.

Even better, the film soon introduces another major theme that figuratively and literally illuminates the entire viewing experience for the audience: As the Croods are forced to leave the sullen safety of their cave and confront the dangers of life, they learn to be both creative and brave—and thus truly human!