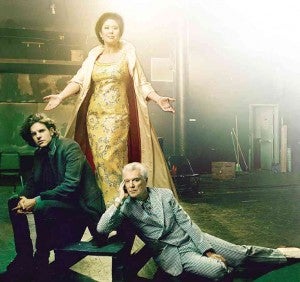 LOS ANGELES—Jose Llana is Ferdinand Marcos to Ruthie Ann Miles’ Imelda Marcos in David Byrne’s “Here Lies Love,” a “nontraditional” musical which will have its world premiere at The Public Theater in New York on April 2. Jose, who starred opposite Lea Salonga in “Flower Drum Song,” feels working with the Talking Heads cofounder and Oscar-, Golden Globe- and Grammy-winning composer is the coolest gig he has ever landed.

David, a multihyphenate talent (he’s also a photographer, author, film director and an artist who creates sound and visual installations) who was inducted along with his Talking Heads bandmates into the Rock and Roll Hall of Fame in 2002, wrote the lyrics and composed the music with Fatboy Slim. Tom Gandey and J Pardo contributed additional music.

Directed by the award-winning Alex Timbers (whose credits include the acclaimed “Bloody Bloody Andrew Jackson”) and choreographed by Annie-B Parson, “Here Lies Love” is described by The Public Theater, thus: “Within a pulsating dance club atmosphere, David Byrne and Fatboy Slim deconstruct the astonishing journey of Filipina First Lady Imelda Marcos, retracing her meteoric rise to power and subsequent descent into infamy and disgrace at the end of the People Power Revolution.

“‘Here Lies Love’ is neither a period piece nor a biography, neither a play nor a traditional musical but an immersive theatrical event combining songs influenced by four decades of dance music, adrenaline-fueled choreography, and a remarkable 360-degree scenic and video environment to go beyond Imelda’s near-mythic obsession with shoes and explore the tragic consequences of the abuse of power.”

In a piece about the show in Vogue that featured his striking photo (taken by Annie Leibovitz) with Alex and Ruthie coiffed as Imelda, David was quoted by writer Adam Green as saying, “I love pop dance music, and I thought that maybe it could have some meaning beyond the fact that Imelda liked going to clubs. It could be evocative of the hedonism or the euphoria that somebody in Imelda’s position was feeling. And I thought it could mirror how the intoxication of politics and power carried over into that bubble world.”

The Vogue piece mentioned that the show’s title “comes from the phrase (Imelda) Marcos once asked to have inscribed in her tombstone.” We first heard and wrote about David’s project in its incarnation as a concept album, released by Nonesuch Records in 2010, that featured Charmaine Clamor, the only Filipino singer in a star-studded line-up that included Cyndi Lauper, Natalie Merchant and Tori Amos.

The musical’s venue, The Public’s LuEsther Theater, has been transformed into a disco club harking back to the Studio 54 era. With a capacity of only 150 people per show, LuEsther promises to be an apt, intimate place for “Here Lies Love”—its creators stress there will be few seats since they want to encourage the audience to dance, stand and move with the actors.

As befits an Imeldific musical, the costumes, as designed by Clint Ramos, promise to be showstoppers. “I do know that the costumes are gorgeous and take you through many decades of Filipino style,” said Jose, a Quezon City native whose Broadway credits include “The 25th Annual Putnam County Spelling Bee,” “The King and I” and “Rent.”

Originally slated to close on May 5, “Here…” has been extended before it could open. The musical now runs through May 19. Ticket information is available at www.publictheater.org.

Excerpts of our e-mail interview with the NY-based Jose: 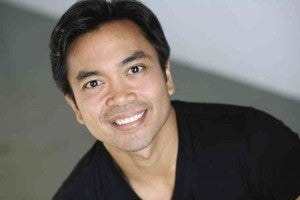 How cool is it to be working with David Byrne?

The coolest. This project is officially the “coolest” project I’ve ever done, according to my family and friends.

How did you land the part? Were you aware of the concept album?

I actually landed the part for the first workshop in 2011. The Public Theater produced a weeklong experimental workshop with David, Alex, Annie-B and about 10 actors to test about nine of the songs. That workshop was very successful. We had another one several months later to continue work on the next nine songs. The 2012 workshop was technically the third workshop during these past two years but it was the first time we did the whole show including the new songs. I had heard of the “Here Lives Love” concept album through friends but I hadn’t listened to it.

What kind of research did you do to prepare for the role?

As with any other historical role, I researched as much as I could during each workshop. Of course, having been born in Quezon City in 1976 and with two parents who were activists in Manila during Martial Law, I didn’t have to go far to hear first-hand accounts of Marcos and that time period.

Which songs in the concept album do you get to sing as Marcos?

“Perfect Hand” is my big song in the show but they’ve also turned “Pretty Face” and “Don’t You Agree” into duets for Imelda and Ferdinand. They’ve also rewritten the lyrics of “Never So Big” as a duet for us, too. There are also new songs that aren’t on the album that Ferdinand sings.

Ferdinand and Imelda Marcos are controversial figures to this day. What’s your attitude as an actor portraying a real-life character who elicits strong reactions from both admirers and critics?

Obviously, as a Pinoy, I was raised with a keen awareness of who Marcos was and the pain he inflicted on our country. I’m also aware of the throngs of supporters he had while he was robbing the country blind and ordering murders. I find that fascinating. My job as an actor is to play the part that’s been written for me to the best of my abilities. This show is not meant to be a biography or a political commentary. It’s David Byrne being inspired by the history and figures who were the Marcoses, the people in their history and lives.

Have you met Imelda Marcos?

I have. I performed at a Red Cross gala in Manila in 2002 where she was a guest. She asked to meet me and I met her at her table.

Imelda, like Ferdinand, is a larger-than-life figure. What do you think Ruthie Ann Miles will bring to the role? And what are you excited about her portrayal of Imelda?

First of all, I think Ruthie Ann Miles is an extreme talent and is truly the star of our show. Her portrayal of Imelda is beautiful. She’s been able to mix Imelda’s known charisma with her utter sense of delusion and lack of self-awareness.

You, David Byrne and several cast members got to present a “teaser” when you performed in The Public Theater’s fundraiser at the Pace Gallery. What was that like? 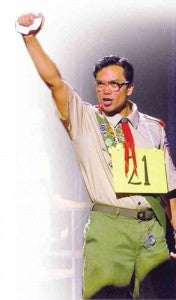 AS CHIP Tolentino in “Spelling Bee”

It was amazing. Ruthie and I, Joshua Dela Cruz and Renee Albulario, got to jam with David on three songs from the show. Jamming with David Byrne—that’s a cool thing to say you did once. Although, it’s important to note to the audience that David is not in the show every night. He was just there for the fundraiser.

How are the rehearsals so far?

Rehearsals are going great. All the elements are coming together and we can’t wait to show it to the world.

What’s in store for the audience in a disco musical directed by Alex Timbers that was described by The Public Theater as “a wholly immersive theatrical event”?

What are you looking forward to the most on opening night?

My mom and dad’s presence. They may have a hard time seeing me play Marcos, but they will be proud to see how the show ends. The People Power Movement plays a big part in the show and I couldn’t be more proud of it.