Meet the boy in a pink bubble 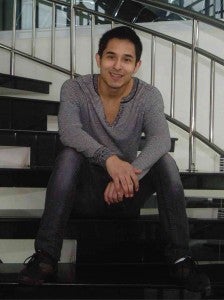 The way he looks at it, being an openly gay actor will not limit him, but double his chances of landing roles instead.

Actor-model-painter-musician—and now, YouTube sensation Sebastian Castro waxes optimistic: “I can team up with both men and women.”

He recalls that the first Filipino film he saw was Marlon Rivera’s “Ang Babae sa Septic Tank.” He has some of the lines of dialogue from the indie comedy committed to memory. “I know what the ‘elevator’ and ‘TV Patrol’ acting styles are all about.”

It’s charming that Sebastian, who doesn’t have a single drop of Pinoy blood (his parents are Peruvian and he grew up in the United States), totally gets Filipino humor.

He would like to meet androgynous model-actor BB Gandanghari and is thankful to comedian John Lapus for posting his music video on Facebook.

Since that video, “Bubble,” went viral (367,090 hits after two weeks at press time), he has been swamped with offers to guest on this and that TV show. An indie movie is in the works, too, according to his manager Dennis Sebastian. There’s a plan to host a cable show as well.

He wants to be known as “an artist.” He’s a painter and his works led him to his debut movie. He is in the cast of Hong Kong filmmaker Scud’s international movie “Voyage.”

(Scud, or Danny Cheng Wan-Cheung, is an award-winning writer-director whose films tackle controversial topics like homosexuality, suicide and drug abuse.)

“Voyage” is Scud’s fifth film, and his first in the English language.

According to Screen Daily, “Voyage” is a multiepisode movie shot in Hong Kong, Mongolia, Malaysia, Australia and Germany. Sebastian’s episode was filmed in Hanover, Germany.

Not only his paintings ended up onscreen; Sebastian landed a pivotal role, as “a straight artist who’s suicidal,” with some nude scenes to boot.

He describes himself as “a carefree guy,” so playing a depressed painter was challenging. “As a newcomer, I couldn’t slip in and out of character quickly enough.”

Highlight of the film is his “suicide” scene. “It happened in March, in the early-morning hours. I can’t think of a more painful way to die than in ice-cold German waters.”

Working on “Voyage,” he recounts, was a journey in itself. “From Atlanta, I was flown to Hong Kong to Hanover to Amsterdam and back.”

In his blog, he wrote: “For once in my life, my wild travels actually had a purpose… my first movie role.”

He’s been a vagabond since he was “thrown out” of his parents’ house when he came out as gay, at age 17. “I’m a bohemian,” he says. “My goal is to travel all over the world—India, Mexico, Canada, Hong Kong, Germany…”

He chose the Philippines as a second home. “I had always dreamt of being an actor. Instead of waiting tables in Hollywood, I thought of living on the opposite side of the globe and learning a different language.”

He has picked up a smattering of Filipino words and even calls his blog site, pilipinokuno.com.

“Two of my three past relationships were with Filipinos,” he volunteers.

He advises other closeted gays not to be afraid of searching for their place in the sun.

“My parents, as Jehovah’s Witnesses, were not supportive when I came out six years ago,” he relates. “I know how it feels to be alone and rejected… to want to take your own life. If, by coming out, I can help someone feel less lonesome, well, that’s why I’m in social media.”