For Cory Aquino–with love and gratitude 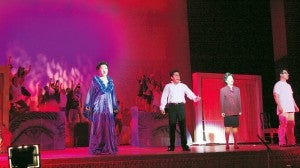 As we joined many Filipinos in observing the second death anniversary of our beloved former president, Corazon C. Aquino, last Aug. 1, we felt gratified that our “Cory, The Musical” production would be restaged on Aug. 20-21 at Meralco Theater, to dramatically vivify her inspiring life and courageous defense of democracy. There’s nothing like a life empathetically relived to remind us of its compelling impact on our shared existence as a nation.

It was in 2007 when our producer and longtime friend, Bing Pimentel, sought us out to actualize her dream to create a theater musical on Cory Aquino, after her grave illness was first reported. It was important to us that the musical should be staged while Cory was still ambulant enough to watch and gain psychic strength from its heartfelt tribute to her many contributions to the country.

At first, people advised us to make the musical play a Cory and Ninoy show, but we politely demurred, believing that both of them were iconically important and influential personages who each deserved a musical of his or her own. Yes, their lives and destinies were conjoined, so we should occasionally dramatize their involvements in tandem, but Cory has her own inspiring story to tell, which must never be upstaged by the more volatile and colorful Ninoy’s exploits. 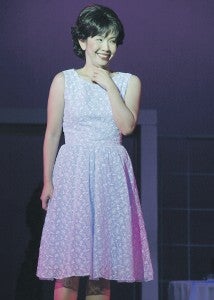 ALVAREZ as a young and lighthearted Cory Cojuangco, and right, receiving the chilling news of Ninoy’s assassination.

We then proceeded to do extensive research preparatory to writing the script and lyrics, which we supported with interviews with people who knew Cory well and could provide insights into the person behind the icon.

For our part, we recalled the times when we had ourselves interacted with Cory, and realized to our delight that many of those occasions involved her having watched the other productions we had staged with Bing, like the musicals, “Pagibig sa Bayan,” “Buhay, Isang Awit” and “Nasaan si Hesus?”

We recalled how supportive and appreciative she had been, boosting our creative spirits in a hugely affirmative way. She didn’t content herself with the standard niceties, but asked detailed questions about how some of those shows’ especially difficult scenes were executed.

From these encounters, we realized that Cory was an “invested” lover of good shows, so we resolved to redouble our efforts to make sure that our dramatic and musical tribute would do full justice to her. It took us five months to come up with a script that met her standards—or, more properly, the high standards that her inspiring and courageous life had set. —And another five months were spent rehearsing the play with a committed theater company led by Isay Alvarez, Sherwin Sozon, Robert Seña, Pinky Marquez and Tommy Abuel.

When “Cory, The Musical” was first staged at Meralco Theater, Cory was already feeling the brunt of her grievous illness, but she still expressed the desire to grace the musical’s gala performance. However, people close to her told Bing that, due to her weakend state, Cory would probably be able to watch only the first act of the show.

—Well, we were hugely heartened when the house lights went up at the end of the play, to see that Cory was still in attendance, applauding and smiling—and even delivering a short, impromptu speech full of gratitude and appreciation that warmed all our hearts.

This Aug. 20-21, Cory will no longer be physically present, but we’re all giving her another series of great shows—because she deserves nothing less!