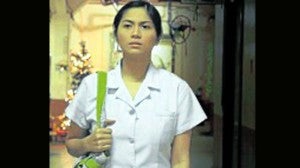 ZUBIRI. Portrays a nurse in docu-drama.

As we continue to watch more Cinemalaya features, our appreciation increases for the good thespic showcase it provides stars and starlets who ordinarily get to play only predictable roles that don’t allow them to show what they’re really capable of.

There’s Diana Zubiri, who plays the lead in “Bahay Bata,” a docu-drama on life in a big maternity hospital during Christmas week. Diana plays a nurse who deals with all of the many pressures that her job entails—until a personal problem makes her entire life come tumbling down.

It’s impressive to finally see the actress do well in a major role. Even more admirable is the fact that she plays her challenging role so naturally, without resorting to histrionics.

Other players similarly do well in the film, which should be cited for the consistent quality of its “ensemble” performances.

Speaking of ensemble portrayals, there are  many textured cameos in “Amok,” so that film should also be credited for its “flavor” in terms of its actors’ portrayals. It’s difficult to meld so many cameo bits into a focused, organized whole. So, the film’s makers should be praised for doing that.

On the debit side, it takes too long for the film’s many separate bits to galvanize themselves into a dramatic whole. There are unnecessarily slow and thus distracting portions, like the long bed scene at film’s start, that call too much attention to themselves and impede the plot development and focus.

But, when it finally becomes  clear that many of the characters are hapless onlookers and victims of a gunman gone amok, the movie’s thematic point came excitingly and pertinently to life.

In “Sayaw ng Dalawang Kaliwang Paa,” the stars are Jean Garcia as a dancer-teacher-choreographer and Rocco Nacino and  Paolo Avelino as her smitten students. It’s good to see Jean in a non-kontrabida role for a change—and dancing, to boot. As for her two younger costars, they show that they can do much more than just look cutesy-cute—and that’s such a relief.

The film itself is too “artful” or just plain arty for us, but the solid showcase it provides its three principal players is most definitely appreciated.