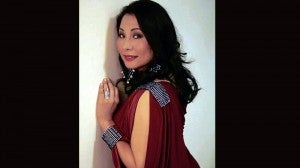 RESPALL. “You have to accept the instability that comes with the acting/singing profession.”

First, it was Aicelle Santos’ charmingly unaffected portrayal in Spotlight’s “Katy” revival that blew us away. In Rep’s restaging of Marc Camoletti’s farcical “Boeing Boeing,” the performance that impressed us the most was turned in by Carla Dunareanu. In Peta’s “D’ Wonder Twins of Boac,” the standouts were Cris Villonco and Gail Billones.

In “The King and I,” Gina Respall delivers a finely limned characterization of Lady Thiang, the head wife of the impetuous Thai monarch, and turns the usually overlooked role into one of the musical’s highlights.

The singer-actress says she’s happy to perform for Filipino audiences again, even if we’re the hardest to please! Even when Pinoys like what they see, they always look for something that will make a performance less perfect—although, I’m just as hard on myself.”

Gina swears there’s nothing more fulfilling than winning her countrymen’s approval—or retracing her diverse roots as a home-grown singer and theater artist (“West Side Story,” “Lapu-Lapu,” “Story of a Moonlit Night”). She will next be seen playing an empress in a musical on Venetian traveler-adventurer Marco Polo. She’s also raring to perform in Tagalog-language productions.

She’s likewise in the process gathering songs for her upcoming solo album.

Tomorrow, the former vocalist of Artstart returns to the concert scene via “Something Wonderful,” 7 p.m. at 19 East Bar, Parañaque, with Joey Generoso as special guest (call 837-6203).

How did she “find” Lady Thiang’s stillness and quiet confidence? She explains, “I had to get rid of bad habits—from my distracting facial expressions to unnecessary movements I wasn’t initially aware of.

“Lawrence Connor, the director who helped me shape the character in London, pointed out how extra gestures were sending mixed signals to the audience. He taught me to feel the moment and not over-think things.”

Would she encourage talented singer-actors to pursue a career in the performing arts? She sighs, “It’s a constant struggle. I won’t discourage anybody whose heart is in it—because it’s hard to give up one’s art. You have to accept the instability that comes with the acting/singing profession.

“In between acting jobs, especially during the economic crunch in London, I worked at an office for almost a year—and I felt like I was dying a slow death.”

What sets Filipinos apart from other performers? Gina readily answers, “We’re resilient and hardworking. We shouldn’t rest on our laurels, however. In between projects, I took classes at the Actors Center, courtesy of a scholarship from the BBC. Performers should keep learning new things—that’s how we evolve as artists!”

TAGS: Art, Lady Thiang, Musical, The King and I, Theater