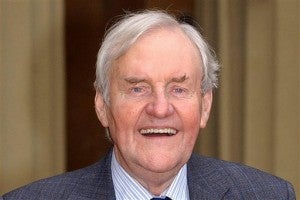 LONDON — British actor Richard Briers, an avuncular presence on TV and movie screens for decades, has died at the age of 79.

Briers’ agent says the actor died at his London home on Sunday. A former heavy smoker, he had suffered from emphysema.

Briers starred in the 1970s sitcom “The Good Life” as Tom Good, a man who decides to quit the urban rat race for a life of self-sufficiency.

It is regularly voted one of the greatest British sitcoms of all time, and is still repeated on television.

Briars also starred in comedy-drama “Ever-Decreasing Circles,” Scottish Highlands drama “Monarch of the Glen” and a host of other shows, and was well known for Shakespearean roles.