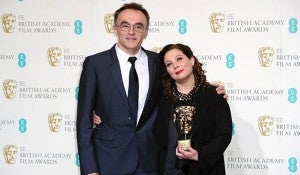 British director Danny Boyle, left, and producer Tessa Ross with the award for Outstanding British Contribution to Cinema backstage at the BAFTA Film Awards at the Royal Opera House on Sunday, Feb. 10, 2013, in London. (Photo by Jonathan Short/Invision/AP)

Boyle’s spectacular panorama of British history and culture beat an eclectic list that included the “Globe to Globe” Shakespeare season and Susan Boyle musical “I Dreamed a Dream.”

“The Curious Incident of the Dog in the Night-time” was named best new play at Sunday’s awards, and “The Bodyguard” best new musical.

A Chichester Festival production of “Sweeney Todd” won five prizes including best actor and actress in a musical for Michael Ball and Imelda Staunton.

Rupert Everett was named best actor in a play for his Oscar Wilde in “The Judas Kiss,” and Sheridan Smith was best actress for the title role in “Hedda Gabler.”

Fry walked out of a West End play in 1995 and disappeared for several days. He said he feared at the time that “I might never return to the stage again.”

“Les Miserables”, which has been running in London since 1985 and was recently transformed into an Oscar-nominated movie, was named best West End show at the awards, which are run by theater website whatsonstage.com and decided by public vote.