Jessica Sanchez returns to do more than sing | Inquirer Entertainment

Jessica Sanchez returns to do more than sing 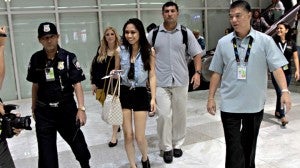 MANILA, Philippines—To help drum up her big date with Manila fans on Feb. 14 at the Smart Araneta Coliseum, “American Idol” Fil-Am sensation Jessica Sanchez met with the entertainment press Monday afternoon. But she did not sing for them.

Sanchez arrived in Manila on Sunday for a series of activities culminating in the Valentine’s concert. She spent only 45 minutes at the press con to answer a few questions and announce that she planned to do a lot more than just sing on this second visit to the country.

The young belter (she’s 17) finished first runner-up last year in the 11th edition of the most popular US reality talent search, “American Idol.”

Sanchez said she had come from a “most meaningful” activity. “This morning, I was with the children at Epifanio de los Santos Elementary School in Singalong for the Read to be Smart program.” She participated in a storytelling session, she added, to help the program’s goal of developing a love of reading among schoolchildren.

Her message to kids her age: “Live life and have fun, have no worries and just go for what you want.”

Among Sanchez’s interesting revelations on Monday was that she was bullied “a lot” in school. Now she is home-schooled, also owing to her hectic schedule since winning “Idol.” She is still in high school but would like very much to finish college, she said.

Talk that she auditioned for the movie version of “Miss Saigon” were just rumors, she said, “but flattering.” What is true is that she will appear in the musical TV series “Glee.”

She has an album coming up that would feature “youthful” tracks, she added. She delighted the press when she declared that sinigang was her favorite dish.

Later this week, Sanchez is set to join the “Smart Jump In” school tour at the University of Santo Tomas, and will squeeze in an appearance at the 2013 UP Fair in Diliman, Quezon City.

Born Aug. 4, 1995, this teener with the powerhouse vocals of an adult, took last year’s “American Idol” by storm and faced off with eventual winner Phillip Phillips (22 at the time) in a rousing finale that saw over 132 million viewers casting their votes.

Sanchez is the daughter of Mexican-American US Navy veteran Gilbert Sanchez and Editha Bugay of Samal, Bataan.

Her Big Dome concert will be her second in the Philippines. She was here in September last year as a touring member of the “Idol” top 12 finalists. This time around, she takes full top-billing, with fellow finalist Colton Dixon as special guest.