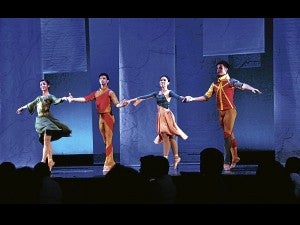 In under four hours,  we had: 1) crawled into a small-scale mine in Nueva Vizcaya with 13-year-old Ongan and followed him around till he held a speck of raw gold in his palm, fruit of his day-long labor; 2) witnessed the grueling life of Bobby, a fisherman/padyak tricycle driver; 3) took in some opera classics as performed by Tsinoy singers; 4) sang along with high school students as the Philippine Philharmonic Orchestra played Eraserheads hits; 5) and marveled at a verbal joust in verse.

And we were there the whole day.

The documentaries “Balitok (Gold)” by Sheryl Rose Andes and “Pamutok (Caught in a Net)” by Godson Escopete; the mini opera, PPO mini-concert  and the Balagtasan were just five of over a hundred performances offered at the Cultural Center of the Philippines’ annual buffet, “Pasinaya” on Feb. 3.

As in the previous eight years, thousands of students, teachers and art (dance, music, theater, cinema, literature) enthusiasts both local and foreign flocked to the event. The head count fell just a little short of last year’s 50,000: to be exact, 42,932, according to CCP officials.

“We will involve museums and other cultural institutions along Roxas Boulevard,” Millado told the Philippine Daily Inquirer. 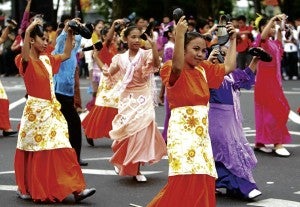 GIRLS dressed in colorful ternos join other performing artists in the morning parade.

The event featured some 3,000 artists from 300 participating groups in over 100 shows and activities.

“We started preparing in December,” said Bahay Tsinoy director Mean Ang See. She was “especially proud” of Comida Tsina, a Tsinoy food fair. “Each food stall had “a curatorial statement on what the food is about and what makes it Filipino-Chinese,” Millado noted. 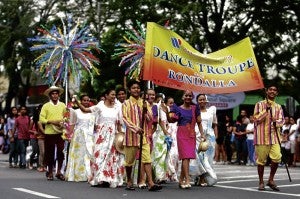 A DANCE troupe with other performing artists

All these groups were to give performances throughout the day. To watch them and any or all of the other offerings, spectators paid a minimum sum of P50 at the gates (P300 donations were welcome, too).

Seems every nook and cranny at the CCP was utilized— theaters, lobbies, hallways, promenade areas, even the outside ramps.

Documentaries from last year’s Cinemalaya Independent Film Festival were screened one after another to enthusiastic young groups who didn’t mind queuing up for every title. 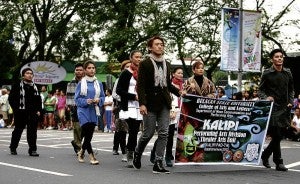 THE KALIPI Performing Arts Group and other participating artists

An excerpt from the coming musical play “Ibalong” was presented on the same stage a while later. Jenine Desiderio, in a sleek serpentine costume, roused the crowd with her powerful voice. Absolute scene stealers were the animal outfits donned by the rest of the cast, the most arresting of which was that of a wild boar’s head.

Adapted for stage by Rody Vera and mounted by Tanghalang Pilipino, “Ibalong” is based on Filipino folk legends.

Ballet Philippines’ performed an excerpt of their coming presentation of Shakespeare’s “A Midsummer’s Night Dream.”

At the Bulwagang Fernando Amorsolo on the fourth level, the Ateneo de Manila Confucius Institute conducted Chinese game demonstrations and a calligraphy workshop.

Calligraphy master Zhou Baofa described the Chinese written art to his select audience as a performance art. Baofa has been practicing this art for almost 30 years. 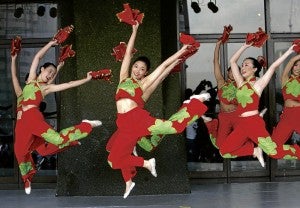 Speaking in Chinese, he told the audience that, on top of pushing one’s creativity to the limit, calligraphy enhances the spirit and one’s physical well-being, like the practice of tai chi.

“To embrace the art of calligraphy,” the master said, “one must use the body to imitate the Chinese characters that will appear on paper.”

Another workshop, conducted by Bahay Tsinoy, taught participants how to create the type of lanterns used for the Chinese Spring Festival, held on the 15th day after the Chinese New Year.

After lantern-making, the festival-goers enjoyed a session of bi-pao, or Chinese jackstones.

The storytelling session at the library ended in a Balagtasan with young poet  Ralph Fonte and veterans Vim Nadera Jr. and Mike Corroza.

Before sunset, a street performance by Ukelele Underground Philippines, a motley group of enthusiasts, attracted a bemused crowd, some of whom happ 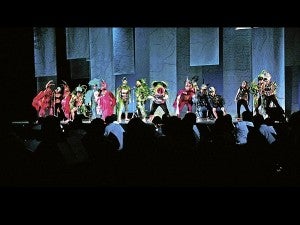 ily joined in with their own ukes.

At 6 p.m., “People’s Gala,” culmination of the day’s event, filled Tanghalang Nicanor Abelardo to its 1,500 capacity.

In his thank-you address, Millado said: “‘Pasinaya’ is a great opportunity to show the whole world how brilliant and creative Filipinos are. We hope to see all of you in future shows at the CCP.”