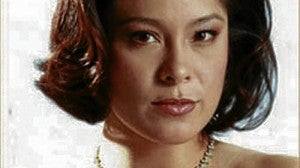 When we learned that “Maala-ala Mo Kaya” would be dramatizing the life story of Grace Poe, we made a mental note to watch its telecast last Saturday. We’ve admired Grace’s adoptive parents, Fernando Poe Jr. and Susan Roces—and the way that Grace has made a name for herself, despite their potentially “overwhelming” fame and stature.

True enough, when the teleplay unfolded, it quickly chose for its themes the fact that Grace was adopted, her efforts to deal with the emotional toll taken by her  discovery of that fact and her need to assert herself as an individual without appearing to be ungrateful for the perks of such a prized pedigree.

These thematically valid thrusts made “MMK’s” Grace Poe episode different from its usual dramatic fare, which is of the physically stricken, disadvantaged and disenfranchised sort.

But, it still resonated with us, due to the informed performance of Sheryl Cruz as her aunt, Susan Roces. Aside from the physiognomy they share, Sheryl is intimately familiar with Grace’s story, so she imbues her portrayal with uncommon insight and believable attention to detail.

FPJ is played by Tonton Gutierrez who more superficially opts to imitate the movie king’s signature speaking voice and thumbs-in-pants-pockets pose and mannerism. Nice try, but we would have preferred a less predictable approach than that.

However, Tonton did better than the telecast’s biggest disappointment, Erich Gonzales’ portrayal of the teen and young-adult Grace.

If Tonton tried too hard to “characterize” FPJ, Erich didn’t change much at all as Grace, and in fact appeared to be generally content to play a mere variation on herself.

Granted, Grace is a relatively laid-back person with few “characterizing” aspects, so she’s relatively difficult to clearly limn. But, we’ve had enough occasions to interact with her for us to know full well that she isn’t a mature version of Erich Gonzales, either.

So, the actress should have tried much harder to get under Grace skin, so to speak. The fact that she didn’t seem to bother speaks volumes about character-acting as opposed to stars’ “personality” performances in local entertainment.

Despite this thespic insufficiency, “MMK’s” Grace Poe episode still resonated with viewers, because its protagonist’s problems and needs were made sufficiently clear for them to relate to and empathize with.

Not many of us may be adopted, but we understand the lack of closure and self-knowledge that somebody experiences when he or she belatedly realizes that some chapters of his or her young life are missing.

Some viewers may pooh-pooh Grace’s longing to know more about her birth parents in the light of FPJ and Susan’s fame and fortune, but others would realize that it’s not about cachet at all, but the elemental need for self-knowledge.

In any case, that need and the similarly undeniable desire to assert individual identity were compelling themes that motivated us to watch the episode from start to finish.

In so doing, our admiration for FPJ, Susan and Grace grew, especially after personal scenes about their family relationship were staged.

We got to know them more as people rather than as famous personalities, and we appreciated “Popsie,” “Momsie” and their loving daughter even more!