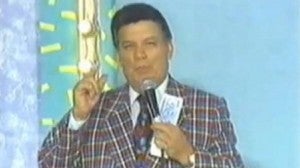 Senior Superintendent Marcelino Pedroso of the Quezon City police said Pimentel, 83, was found dead with a wound to his head inside the bathroom of their house at No. 37 Scout Tuazon, Barangay (village) Laging Handa in Quezon City around 10:30 a.m.

Initial investigation revealed that Pimentel took a bath, but did not come out of the bathroom after some 30 minutes, prompting his wife and house helper to open the door.

“May sugat s’ya sa ulo,” Pedroso said, but investigators have yet to determine whether he simply slipped on the floor as he was taking a bath, or he suffered a heart attack.

The case has been placed for further investigation.

Pimentel’s body was cremated immediately and the ashes will be taken to the Pinaglabanan Church in San Juan City later in the day, radio reports said.

Pimentel was a game show host of “Kwarta o Kahon” that lasted for over three decades on television.

Read Next
Love, January 24, 2013
EDITORS' PICK
High inflation: Your P1 is now worth only 87 centavos
UK’s Boris Johnson will resign, BBC reports
High-risk pregnancy: Reducing your risk is in your hands
Geek out at TOYCON 2022 powered by Smart Signature
House energy committee chair Arroyo bats for cheap electricity
Unemployment rate up to 6% in May
MOST READ
Suspect in grisly killing of missing woman in Bulacan arrested
Kim Atienza’s daughter flaunts bikini body in response to critics of her ‘revealing photos’
Number of active COVID-19 cases in PH breaches 11,000
Ex-Defense chief Lorenzana is the new BCDA chair
Don't miss out on the latest news and information.