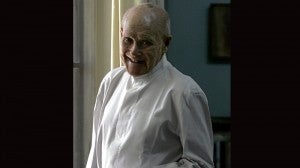 REUTER. True pioneer and visionary in the world of theater, radio and television.

Fr. James B. Reuter’s passing last week at 96 brought back memories of the years I worked with him on his stage and film productions, and the valuable lessons I learned from him during my teen years onwards.

A true pioneer and visionary in the world of theater, radio and television in this country, he dared to do, while others just bemoaned the “limitations” that prevented them from being similarly productive. Yes, there were always severe restrictions in terms of funds and opportunities, but Father Reuter forged on, anyway.

I first met him at the Ateneo de Manila Graduate School, when I took his pioneering class in TV production. He mentored with minimal equipment, but he was still able to teach us “TV language” as best he could.

On a more applied and practical level, he directed the pioneering “Family Theater” drama anthology show on ABS-CBN, and I learned from acting in and writing scripts for that weekly show, as well.

Mind you, this was before the invention of the video tape, so all productions had to be done live! It was a scary and stressful challenge, because no mistakes were allowed—and nobody got paid! But, it provided great, hands-on training for the eager-beaver likes of Doreen Gamboa (Fernandez), Noel McRae, Patsy Monzon and truly yours.

My “moment” on “Family Theater” came when Father Reuter cast me as a newscaster in an anthology drama, and I announced the “breaking news” report that war had just been declared.

While it was made clear that this was just a TV show, quite a number of viewers were apparently convinced by my performance that the Philippines was actually at war, and they deluged the station with frantic calls! In fact, the incident was even written about in some newspapers, making me instantly “famous”—for about five minutes.

Less publicly, I also worked as Father Reuter’s stage manager on the touring production of James Barrie’s “What Every Woman Knows,” with no less than Jaime Zobel as the male lead! Yes, in his 30s, Don Jaime was a stage actor, and I was the guy who handed him his coat before he entered a scene, among my 100 other tasks.

Before the touring production hit a city in the provinces, I flew there in advance and, all by my lonesome, begged, borrowed or “stole” the appropriate furniture for our play at each and every location—then had to worry about returning it to its rightful owners after the  performance. —Well, you can imagine how frazzled I got, but following Father Reuter’s inspiring example, I just up and did it all!

It was while working on “Family Theater” and other Reuter shows that I made life-long friendships with Doreen, Noel, Barbara Perez, Bibsy Carballo, Patsy and other committed young comers.

I also learned a lot from Father Reuter as a writer, especially his penchant for writing clearly and feelingly, with no “decorative” artistic curlicues allowed.

Perhaps most importantly of all, he was one of those who taught me how crucial the arts and media are to a nation’s life, and this is the mantra I keep intoning in my articles to this day.

Like the many other talents he mentored, I felt sad when I heard that Fr. James B. Reuter SJ, had passed away. But, it was a great consolation for me to realize that he had lived a full life—and left so much for us to remember him by!