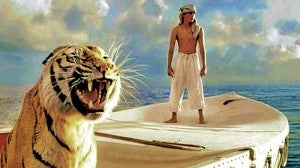 “LIFE OF PI.” A film of astonishing beauty.

“Faith is a palace with many rooms,” declares Pi Patel, the protagonist of Ang Lee’s compelling big-screen parable, “Life of Pi” (showing on Wednesday, Jan. 9), as he explains his multifaceted religious persuasions: Patel’s belief in Catholicism, Hinduism, Judaism and Islam go beyond mere fascination, and grew even stronger after surviving a shipwreck that took the lives of his whole family and set him adrift at sea—for 227 days!

Patel’s ordeal happened when he was only 16 years old (he’s played as a teen by the terrific Suraj Sharma), after his father decided to sell the family zoo in Pondichery, India, and migrate to Canada.

When the North America-bound freighter carrying Pi and his loved ones sinks during a storm, the precocious teenager suddenly finds himself adrift in the Pacific Ocean on a 26-foot lifeboat.

Unfortunately, while his survival skills are impeccable, he has a difficult time getting along with his four “companions”—an injured zebra, a famished spotted hyena, a depressed orangutan, and a cantankerous Bengal tiger named Richard Parker!

It doesn’t take long for Mr. Parker to demonstrate who’s on top of the food chain—but, is Pi smart enough to convince his 450-pound co-survivor that he is more useful alive than as a food source?

Lee’s latest cinematic triumph is a film of astonishing beauty. It’s a breathtaking visual spectacle that’s as entertaining as it is thematically significant. At first blush, the story of a dauntless Indian teenager embarking on a perilous journey with a tiger sounds more whimsical than realistic—but, the way the production tells its tale is what sets it apart from this season’s other films.

Swathed in gleaming colors, the movie is an allegory for survival and the triumph of the human spirit—and kicks off the Academy Awards race. (Scheduled to be shown on Jan. 11 is Kathryn Bigelow’s “Zero Dark Thirty,” followed by “Les Miserables,” on Jan. 16.)

The director makes the viewing experience more “relatable” by deciding not to “Disney-fy” or romanticize his film’s premise—as a terrifying scene involving Pi, his father, Richard Parker and a poor baby goat demonstrates early on.

Alas, Pi Patel isn’t Rudyard Kipling’s Mowgli, and Richard Parker is no Shere Khan! Just the same, that’s no reason for them—and mankind, in general—not to tolerate each other’s differences and learn to coexist in harmony.

The movie is anchored on real emotions, intelligently and intuitively conveyed by Sharma and the other actors who portray Pi at different ages. Sharma and company invest their roles with subtle shades of humor that help leaven Pi’s core as a curious and impressionable protagonist.

This is the film to see in digital 3D—its Oscar-worthy look will remind you of Akira Kurosawa’s “Dreams” and the Robin Williams starrer, “What Dreams May Come.” Moreover, the sparkling images conjured up by Lee’s “magic wand” don’t draw attention away from the story and, in fact, help deepen the relevance of its metaphysical musings.

This is evinced by Pi’s encounter with a playful whale in the bioluminescent sea at night, and his adventure on a floating island of lush forests, edible plants, huggable meerkats—and carnivorous algae!