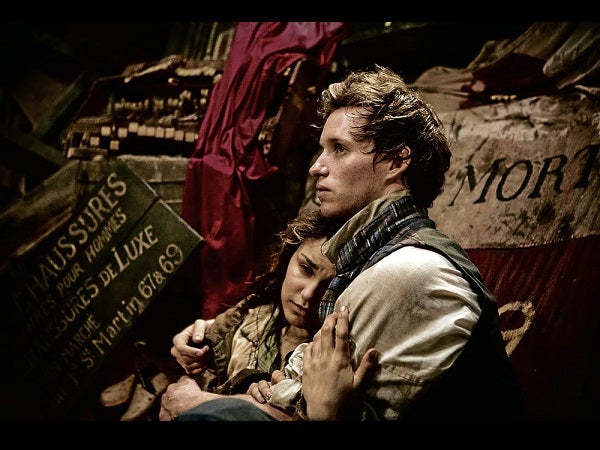 SAMANTHA Banks (as Eponine) and Eddie Redmayne (as Marius) in “Les Miserables” the movie.

LOS ANGELES—He was considered for the Marius role in “Les Miserables” based on a video he himself had shot on his iPhone. No less than Hugh Jackman literally carried him around for days while shooting a scene. Prince William was his classmate at Eton College.

These are just some of the remarkable trivia about Eddie Redmayne, who is captivating moviegoers in the film version of the beloved musical.

Eddie, looking very much the preppy that he is in a tweed suit, recounted the unusual way he snagged a chance to audition for the part of the rebel Marius, who figures in a love triangle with Cosette (Amanda Seyfried) and Eponine (Samantha Barks).

“I was making a film (‘Hick’) in North Carolina with Chloe Moretz and Blake Lively,” began the personable, freckle-faced actor. “One night, we did karaoke at Blake’s house. I was just singing and they were like, ‘Ed, aren’t they going to make ‘Les Mis’? Shouldn’t you try auditioning?’ A couple of nights later, I was in a trailer. It was a night shoot, about 2:00 in the morning. I sat procrastinating and I was like, why not give it a shot? Dressed as a cowboy with a limp (his character in ‘Hick’), I sat in my trailer and filmed myself with my iPhone singing ‘Empty Chairs at Empty Tables.’ I did it three or four times and then took the role of a director and cut all the crap ones.

“The one that I sent was not even that great but I sent it anyway to my agent, Josh Lieberman, to show him that I enjoyed singing. Without me knowing it, Josh sent it to Eric Fellner, who’s one of the producers of ‘Les Mis.’ I was like, ‘That wasn’t meant to go to the guys’ because I wasn’t particularly good. Then it was weeks with Tom Hooper and then this panel of judges of Claude Michel (Schoenberg), the composer, all the Working Title Films troupe and Cameron Mackintosh. It felt like ‘American Idol.’ I have newfound respect for the guys who do those shows because it’s pretty tricky.”

Landing the part thrilled Eddie because he saw ‘Les Mis’ on stage when he was 7. “I wanted to be Gavroche, the little urchin.” Smiling, he quipped, “I still want to be Gavroche.” 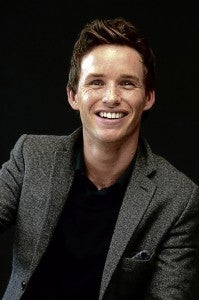 REDMAYNE at the press con. The actor went to school with Prince William in Eton. RUBEN Nepales

As Marius, Eddie is the subject of the film’s classic unrequited love ballad, “On My Own,” sang movingly by Samantha Barks. “When she sang that song, it broke my heart,” Eddie said. “There was something that she did in that song. I remember I was with Danny Cohen, the cinematographer. Samantha had to sing in the rain again and again. She was shivering.”

Recalling one particular scene, he went on: “There’s a moment when she has sung her huge last note. She has her head into her chest and she goes, ‘I love him,’ and her head comes up. It’s like she finds the thought. It is when her head is almost away from the camera.

“All of us behind the monitors went, ‘Oh.’ There was still that chill in our arms. I remember Danny saying, ‘I wish more film actors would realize the strength of keeping your head away from the camera sometimes.’ This moment of her, hidden, and then coming up broke my heart.”

Eddie volunteered to sit beside Samantha when they watched “Les Mis” for the first time. “Sam has such a history with the piece,” he said of the actress, who also played Eponine in a 25th anniversary concert production of the musical. “She’s an extraordinary human being and a formidable actress. Our weight of expectations felt almost as large as the weight of expectations of all the fans. The moment when Hugh ripped up that paper and pieces flew into the air, Sam and I just grabbed each other’s arms. We felt emotionally connected.”

The man, who played Colin Clark in “My Week with Marilyn,” truly loves to sing, as he sheepishly recounted an anecdote about driving in Los Angeles.

“It was utterly humiliating,” said the actor with a grin. “I was driving myself and I was singing fully ‘One Day More.’ It was at a traffic light. I was getting so into the song. This woman had rolled down her car window next to me and was busy trying to indicate if she could pull up in front of me. I was giving the song my all, vocally. I suddenly caught her eye and she looked at me. She was like, ‘Are you the kid from ‘Marilyn’? I sat there, busted singing.”

He also smiled as he recounted shooting the scenes in the sewers. Asked what was in the sewer water, Eddie replied, “Tom kept saying it was chocolate. I guarantee you it wasn’t chocolate. It was a mixture of very cold water, mud and clay. I couldn’t complain because Hugh Jackman had to carry me through all that stuff.

“But there was this moment toward the end of the day when we’d been there for like 12 hours. I was lying there and supposed to be playing dead and Sacha (Baron Cohen) comes and steals the ring. Tom was like, ‘Eddie, it’s a closeup on you, mate. You’ve got to be still because you’re meant to look dead.’ I was like, ‘Tommy, I can’t control my bodily functions. I’ve lost control of my shivers.’ But again, Hugh was such a bastion and leader on this film. For everything he had to go through, he never had a complaint.

“The other hilarious thing was when my makeup artist came up to me and said, ‘Apparently, the water has clay in it. It’s very good for your skin.’ So I got a face mask, thank you.”

“I was on top of a huge stallion with spurs attached to my feet. There were 40 Lithuanian stunt riders behind me and I realized at that point that I probably should have told the truth. They called, ‘Action!’ I almost killed myself and half the crew… covering my eyes. Helen Mirren was up in this huge balcony. Tom came from behind Helen and, with a huge loud speaker, went, ‘You’re a bloody liar, Redmayne!’ It had taken me seven years of begging for him to consider employing me again.”

Eddie said that Tom got his payoff while shooting a scene from this film. “We were doing the rehearsals,” he recounted. “Tom decided that in the funeral scene with the song ‘Do You Hear the People Sing?’ he was going to have me get on a horse and ride with a flag in order that he could have some comedy and entertainment that day. So it was his payoff for years of lying.

Eddie, whose credits include “The Pillars of the Earth” and “Tess of the D’Urbervilles,” confirmed another interesting trivia about him. “I went to school with Prince William when I was 13 to 18 years old,” he said. “I remember that it felt totally normal. But the school that I went to was not particularly normal. Everyone wore tailcoats and yet, because everyone else was wearing tailcoats, you felt that it wasn’t normal. So Will was like any other normal student there. But I do remember that we’d go to chapel in the morning in the assembly and there would be dogs going in and out of the organ loft and sniffing for bombs. I thought that was a bit weird.”

“I haven’t seen him in a long time,” Eddie added. “We played rugby together.”

How would he address  the future King of England if they met again? “I don’t know what I would do,” Eddie answered with that earnest smile.