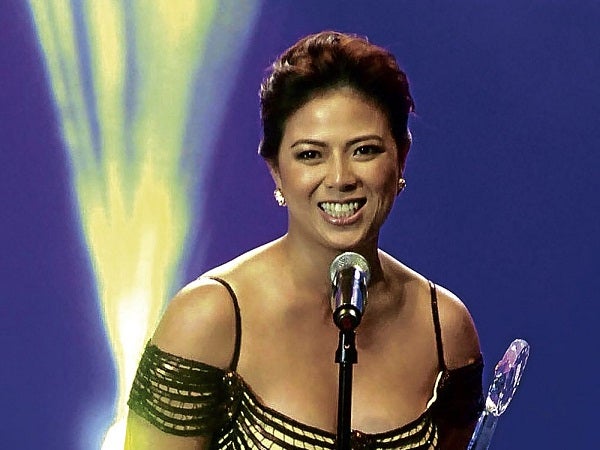 And she thought she’d have to go au naturel, as in buck naked, on the red carpet.

Actress Liza Diño almost didn’t get to wear the gown she had picked for the recent Metro Manila Film Festival (MMFF) awards night held at the Meralco Theater.

“The gown got held up at Customs,” she told the Inquirer. “I had to explain to the authorities that it was an old dress that was Fedex’d from the United States.”

She was determined to wear the stunning number by Japanese designer Tadashi Shoji because she considers it her “lucky dress.”

“I was wearing it when I received my 100 Most Outstanding Filipino-Americans award in Los Angeles early last year,” she recalled.

Based in California, Diño works as line cook at Spago’s in Beverly Hills. This holiday season, she traveled back to Manila to promote her film, Will Fredo’s “In Nomine Matris,” one of five entries in the New Wave (indie) section of the MMFF.

The dress proved to be a lucky charm again: She won best actress in that section.

“I was more nervous about the MMFF compared to the competition in New York,” she said.

She is grateful for the glowing reviews as well: “I’m so happy that our film was accepted by fellow Filipinos.”

She plays a flamenco dancer in “Nomine,” a dance-drama that tackles the curious dynamics of mother-daughter relationships.

Diño, who was present in every screening of the film at Glorietta 4 during its week-long run, was thrilled to witness audience reactions first-hand: “They got very involved in the film. They laughed and cried and would even clap at the end of each dance number, as if they were watching a live performance.”

As such, she said, the award was icing on the cake.

Diño’s homecoming was likewise memorable because it was her first time to spend the holidays in the country in five years. “Plus I got to bring along my daughter Amara, and my mom flew in from Japan,” she said. “It was a family reunion.”

Mom Marissa was naturally delighted to watch “In Nomine Matris,” although “she kept asking about a daring scene— whether I had a body double,” Diño said, giggling.

She had also looked forward to this homecoming because of the 3rd Inquirer Indie Bravo! Tribute, where Fredo, her friend and frequent collaborator, was one of the honorees.

“It was so inspiring to see all these artists in one room together, to see the entire indie community supporting each other,” she said. “It encourages me to make more indie films.”

Highlight of the night, if not of her entire trip, she said, was meeting and having a snapshot taken with another Inquirer Indie Bravo! honoree and MMFF main section best actress (for “Thy Womb”), superstar Nora Aunor.

“I was star-struck. I couldn’t believe I was standing beside her. It was surreal. To see Jaclyn Jose, Cherry Pie Picache, Gina Pareño … They are the best actresses in the business. It makes me proud to be part of this movement,” she said.

While in the country, Diño plans to tape episodes of her cooking show, “Binibining Kusinera,” which will be aired on LA-based channel 31, Fil-Am TV, starting this month.

“It pokes fun at my beauty-queen days. In some episodes, I’d be in front of the stove, wearing a gown,” she said of her show.

Let’s just hope that the dress will not get held up at Customs again.