Pierce Brosnan was no slouch as James Bond 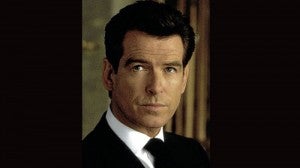 One of the best-looking guys in Hollywood is Pierce Brosnan. Producers initially capitalized on his (very) good looks, so critics were aghast when he was chosen to portray James Bond after Timothy Dalton. His looks are certainly different from those of Sean Connery and the current Bond, Daniel Craig!

Like vintage movie star Cary Grant, Pierce was originally British—and, like Hugh Grant, he appeals to women of all ages. It isn’t easy for young men to admire the actor because, as a rule, they’re jealous of his spectacular pretty-boy looks. But, he’s also a fine actor. After hitting the big time via the James Bond series, he appeared in dramatic vehicles, where he proved his acting mettle.

Brosnan is as good an actor as, say, Leonardo DiCaprio and Matt Damon—and he is just as attractive at the box office. He is certainly more versatile than Tom Cruise!

Pierce’s good looks don’t detract from his macho appeal. In “Die Another Day,” he wasn’t outshadowed by gorgeous Halle Berry, whose presence brings to mind the show-stopping entrance of Ursula Andress in one of Connery’s Bond outings!

Trivia: Cary Grant was famous for turning down choice roles in well-loved movies—James Bond, “My Fair Lady,” “The Birdman of Alcatraz,” etc. Ironically, the last two films won Academy Awards for Rex Harrison and Burt Lancaster, while Grant is remembered for not having brought home an Oscar!