Lawson’s “Taking Over Me”. Video uploaded with permission from MCA Music Philippines.

In 2011, the band made their mainstream breakthrough after becoming the support act for one of Britain’s biggest pop bands, The Wanted, on their first ever theatre tour, The Behind Bars Tour. The band made a great impression on the audience, and received good reviews from fans and critics alike. Having developed a friendship with The Wanted, they returned as the support act for The Wanted’s second tour, #TheCode Tour also known as “TWAT (The Wanted Arena Tour)”. And the rest is history. 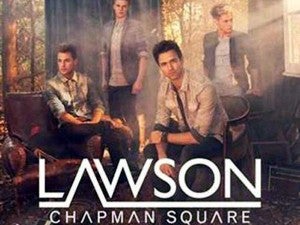 This is coupled with the huge impact of the VEVO Lift campaign for the “Standing In The Dark” video which has now hit three million views worldwide, vaulting over the play counts of “Taking Over Me” and ‘When She Was Mine’. VEVO included them in http://www.youtube.com/watch?v=BOmDZ_e_R9M, their weekly ‘what’s hot’ e-mail blast alongside new Christina Aguilera, David Guetta and No Doubt videos.

On September 8, 2011, it was announced that the band had been signed to Polydor Records, with a lucrative two-album deal on the cards. After signing to a major label, Lawson was tasked with opening for other acts such as Will Young, Avril Lavigne, and again for The Wanted.

Their debut album, Chapman Square which is sitting comfortably at No. 3 on the UK album midweek charts and steadily climbing the charts of  iTunes UK and Asia,  boasts of potential hit singles like “When She Was Mine”, “Standing In The Dark” and the carrier  track “Taking Over Me’’. “Taking Over Me” is now positioned at Number 1 on Magic 89.9 and # 12 on Monster Radio RX 93.1. (advt)

Get it now on ITUNES:

Get to know more about “Lawson” here: http://www.lawsonofficial.com/the-band/