Ricky Martin wishes he could come out again 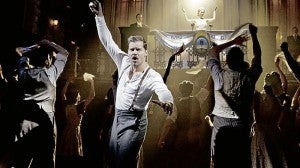 MARTIN essays Che with a wry grin and a twinkle in his eye. He carries himself with abundant charm and stage presence. Photo credit: evitaonbroadway.com)

UNITED NATIONS–Latin superstar Ricky Martin is telling a U.N. conference on homophobia that he wishes he could come out again so he could tell people struggling with their identities that “it’s just beautiful — you find love.”

Martin said Tuesday that “for many years, I lived in fear … because I was hating myself because I grew up listening to a very crooked concept: ‘You’re gay. You belong in hell.'”

Martin, who is currently starring on Broadway in “Evita,” said it was amazing to be at the United Nations surrounded by people “fighting for one cause — equality and love and social justice.”

He praised U.N. Secretary-General Ban Ki-moon who got a standing ovation after telling the conference that lesbian, gay, bisexual and transgender people — the LGBTs — “are entitled to the same rights as everyone else.”

“They, too, are born free and equal,” Ban said. “I stand shoulder-to-shoulder with them in their struggle for human rights.”

The secretary-general said he is “pained” that more than 76 countries still criminalize homosexuality.

“I am here to again denounce violence and demand action for true equality,” he said.

While the past decade has seen far-reaching reforms in Europe, the Americas and a number of African and Asian countries, Ban said, in a number of countries — including Ukraine — draft laws have been proposed that would criminalize public discussion of homosexuality.

South African singing star Yvonne Chaka Chaka, a human rights activist and goodwill ambassador for the U.N. children’s fund who is married and has four children, said “I think straight people should respect other people because, for me, I don’t think there’s anything crooked about LGBT.”

Their only “crime,” she said, “is because they love the same gender.”

Chaka said her husband is a prince who is allowed to have three or four wives “but I would not let him.”

“I will never allow him to have a second wife, and he knows that. That is why he chose me,” she said. “If he wants to, goodbye.”