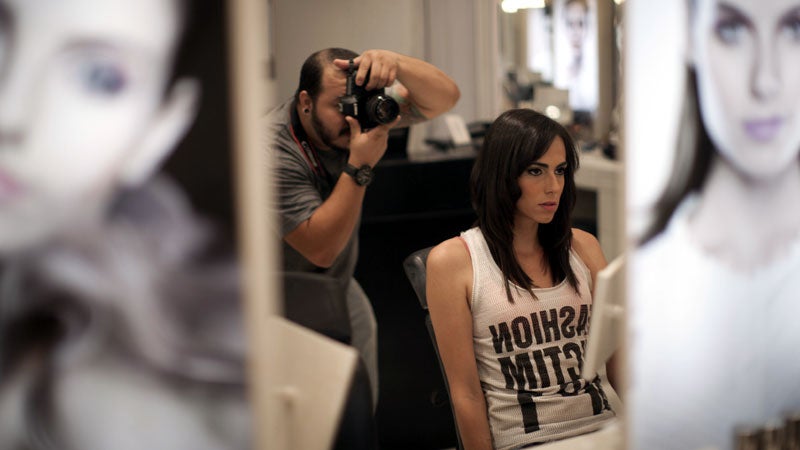 In this Dec. 4, 2012 photo, Brazilian transgender model Felipa Tavares is photographed by fashion photographer Emerson Muniz during a photo session in Rio de Janeiro, Brazil. The 6-foot-tall Tavares is among Brazil’s small but growing ranks of transgender models _ leggy, high-cheekboned sirens who were born men and are causing a splash here as well as in Paris and other international fashion capitals. AP

RIO DE JANEIRO — Walking the catwalk in a Brazilian bikini is a nerve-racking experience for even the most seasoned of models, but for Felipa Tavares it’s nothing short of terrifying.

The 6-foot-tall Tavares is among Brazil’s small but growing ranks of transgender models — leggy, high-cheekboned sirens who were born men and are causing a splash here as well as in Paris and other international fashion capitals. 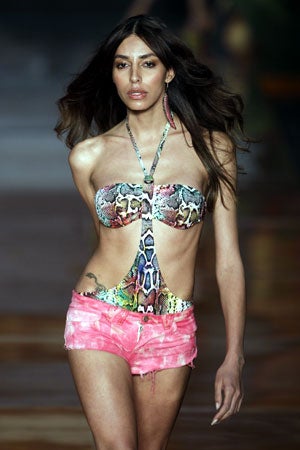 Though they emerged onto the scene here just around two years ago, Brazil’s so-called trans-models have already added a pinch of exoticism to the country’s showcase modeling sector — long dominated by blonde women such as Brazilian uber-model Gisele Bundchen. The trans-models’ newfound prominence also points to a seismic shift in Brazilian society, which has seen macho, homophobic attitudes soften in recent years as gays win more legal rights.

“We are in the 21st century and there is just more tolerance in the air. Here in Brazil we now have gay mayors, gay lawmakers,” said Sergio Mattos, director of the Rio-based modeling agency 40 Graus Models. “So why not trans-models? The world has evolved and now discrimination is, thankfully, becoming a thing of the past.”

In the fashion world, gender ambivalence has been a la mode since the 1970s with the emergence of glam rock and its poster child, David Bowie. But today’s trans-model trend exploded with Lea T., a 5-foot-11-inch stunner who catapulted to international stardom in 2010 as the muse of coveted Paris couture label Givenchy. Born a boy to Brazilian soccer-star Leandro Cerezo, the wild-maned brunette model appeared last year on the cover of edgy British fashion magazine Love, where she’s shown locked in a smoldering kiss with supermodel Kate Moss.

Mattos, the eagle-eyed former head of Elite models in Brazil who’s best known for discovering a gangly Bundchen at age 14, and other top models including Ana Beatriz Barros and Isabeli Fontana, said he jumped on the trans-train almost by accident.

Mattos was giving a two-day basics-of-modeling class to Tavares, unaware of her gender history. Impressed by her raven locks and enormous doe eyes, Mattos offered her a spot among the 200 models he represents.

“It wasn’t till I saw her ID with her birth name that I realized she wasn’t born a woman,” said Mattos. “I thought, ‘What the hell, let’s give her a shot.'”

In some ways, the trans-models have a proverbial leg up on their female colleagues, Mattos said. Unlike even the thinnest of women, who often fight cellulite and stretch marks, the trans-models have long, sinewy limbs unscarred by such typically female afflictions. Once they’ve lasered away facial or body hair, they can sometimes look more feminine even than models who were born female.

With her sharp features and lanky silhouette, 26-year-old Tavares said she’d always harbored vague dreams of becoming a model. But growing up a boy in the interior of Minas Gerais state, far from Brazil’s glitzy coastal metropolises of Rio and Sao Paulo, it always felt like something of a pipe dream, said the model.

“As a kid, I remember being so uncomfortable in the boys’ clothes my parents dressed me in. I never played football and I just wanted to hang around with the girls, playing dolls or dress-up,” said Tavares, who goes by the feminized version of her birth name, Felipe. But it wasn’t until her late teens that, thanks to some Internet research, she learned about transsexuality and sought out the hormone treatments that have allowed her to transition into womanhood.

The hormones filled out her hips and gave her small breasts, while laser treatments erased any trace of the light beard she once had. Cascading locks of artfully layered hair mask her sharp Adam’s apple.

“Strangers started approaching me in the street, and every time it happened, I was so scared they were going to chew me out for being a transsexual,” she said. “But actually, they all wanted to tell me I should become a model.”

Tavares is still saving money for the $15,000 sex reassignment surgery that will give her female genitalia. Still, that hasn’t stopped her from donning itsy-bitsy bikinis in ad campaigns for Brazilian swimwear labels. Walking the catwalk in a swimsuit, however, is still a prospect that frightens her.

“The bikinis here are so tiny, the idea of wearing one in a show, with the lights and the cameras and everyone looking at you, it’s super scary,” she said.

Carol Marra, a 25-year-old transgender who is also with Mattos’ modeling agency, became a cause celebre at Rio fashion week last May when she sported swimwear on the runway. The 5-foot-11 brunette model, who has had breast implants and the tip of her nose fixed, said she plans to undergo sex-reassignment surgery next month.

A journalist by training, Marra worked for a local TV station before her trademark androgynous style launched her career as a fashion stylist.

“The photographers I worked with were always saying, ‘You should model, let me take pictures of you.’ But I was really shy and I didn’t want to be in front of the camera,” said Marra, who also hails from Minas Gerais state. Eventually, she agreed to pose for a friend, she said, and those photos led to other photos and to a modeling career that took off about a year and a half ago.

Since then, she’s enjoyed remarkable success, doing a whirlwind of commercial work, as well as her much-hyped appearances at Fashion Rio and Sao Paulo fashion week and a nearly nude cover of men’s magazine Trip.

Still, being a transgender remains a double-edged sword in Brazil, said Marra. She’s been rejected for jobs because clients were worried that she would send the “wrong message” to customers. Scenes she shot for a pharmacy commercial ended up on the editing room floor when the client panicked at the last minute.

The head of a gay, lesbian and transgender advocacy group, Toni Reis, cautioned that success on the runway doesn’t mean transgenders and transsexuals are out of the woods yet.

Despite its international reputation as a haven for transgendered people, 114 trans people have been killed in Brazil this year to date. Brazil and Thailand are reputed to have among the world’s largest trans populations.

“These were people killed in terrible ways, stabbed 40 times, their heads split open with a machete,” said Reis. “They were not victims of the sort of everyday violence we see here in Brazil, like armed robberies and such, but rather the victims of homophobia.

“Within the gay community,” he said, “transsexuals continue to be the most vulnerable group, by far.”

Nonetheless, the gay rights movement has made major headway in Brazil, the world’s largest Catholic country. A 2011 decision by the nation’s high court to recognize same-sex civil unions was hailed as a watershed, although it stopped short of legalizing gay marriage.

In a major coup for transgendered people, nearly all Brazil’s 26 states have so-called “common name” laws on the books, requiring school teachers to call trans students by the names they go by, as opposed to their birth names, activists said.

Transgenders are even entering the mainstream media and culture.

There’s even talk that TV Globo, Brazil’s No. 1 broadcaster, might soon include a transgender character in one of its prime-time soap operas.

“You know fashion is fickle, what’s in one day is out the next,” said Marra. “I hope trans models are not just a trend, to be dropped like a hot potato next season.”