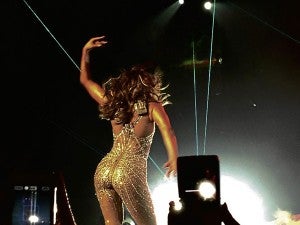 THE REAR VIEW Jennifer Lopez is just as spectacular from behind as she “morphs into a digital idol” before a crowd of 11,000 in a song-and-dance extravaganza in Monday night’s concert at Mall of Asia Arena. MYLENE MORALES / CONTRIBUTOR

The stars came out and shimmered—and we’re not talking of the celestial kind.

Monday night at SM Mall of Asia (MOA) Arena, the red carpet was laid out for the country’s famous names and faces in politics and show biz for an event that bore the splendor of Hollywood.

They all came not to bask in the spotlight, but rather to join the rest of the more than 11,000 people who filled up MOA Arena to watch the biggest star of the night, Jennifer Lopez.

But she failed to impress Sen. Miriam Defensor-Santiago. Saying she went to see the pop concert to expose herself to a different kind of genre, classical music-lover Santiago bewailed what she called an assault on her ears.

“I am strictly a high-brow girl. I like classical music, opera and ballet. I went for exposure, total immersion. I was shocked beyond belief at the attack the assault on my ears. It was so loud,” Santiago said.

“Let me just say I was not impressed,” she added.

But Lopez was so sexy, said a reporter.

“I have no ambition of becoming a sex kitten or assaulting people to deafness,” Santiago pointed out.

“There were so many people and they stirred themselves into a frenzy. So, actually they were worshipping at the foot of someone who was no longer human. She morphed into a digital idol. That was my experience last night,” she added.

Lopez, popularly known as JLo, is a New York-born dancer, actress and singer of Puerto Rican descent who had successfully bounced back into the music scene after an absence of four years.

It was her first time to play in Manila, in a concert whose tickets were priced way out of the reach of her less privileged fans.

This was apparently due to her own astronomical talent fee, estimated at $2 million (P84 million) by a source familiar with deals offered to artists of her stature.

The concert itself would probably not have materialized without the financial backing of three big sponsors, one of whom is a real estate company identified with the Villars.

And so it looked like the senator was throwing a high-profile party for his colleagues and friends—the entire VIP section on courtside was occupied by his guests—with no less than a glamorous international celebrity as performer.

The guests jumped to their feet as pandemonium broke loose when Lopez emerged onstage with a full band of six musicians, two backup vocalists and a squad of dancers.

A song-and-dance extravaganza ensued—each number showcasing Lopez’s agility and charm as a consummate entertainer, never mind if her singing voice was inadequate and had to be supplemented by a pair of powerful black female singers.

The music, an amalgam of dance-pop, Latin, R&B, hip-hop and reggae, was heavily synthesized with big, loud thumping beats, the kind one hears in dance clubs. Combined with visual elements from theater (stage props, musical revue-type costumes of the dancers) and film (videos of Lopez and her musician collaborators), her stage act dazzled the crowd.

In hindsight, Lopez follows a line of media-savvy female performers such as Madonna, Kylie Minogue, Janet Jackson, Britney Spears, Beyonce and others who achieved fame and fortune by exploiting the power of image while working hard to gain acceptance as a creative musical artist.

At the concert, Lopez exuded a spellbinding portrait of a sex symbol and pop star who seem larger than life, but who appeared humble enough to reach out to her fans by getting near them in between songs. With a report from Norman Bordadora