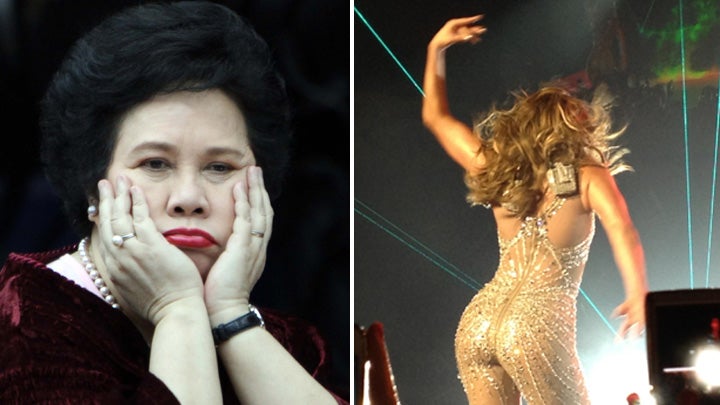 MANILA, Philippines—It was a high energy performance that thrilled thousands of cheering fans at the Mall of Asia in Pasay Monday night.

Jennifer Lopez made sure it was a night to remember.

But Senator Miriam Defensor-Santiago, who was in the crowd as the 43-year-old Hollywood celebrity sang and danced the night away, wasn’t impressed.

“Let me just say I was not impressed,” Santiago  told reporters on Tuesday.

“I was shocked beyond belief at the attack, the  assault on my ears,”  she said of the concert. “It was so loud, and there were so many  people. They turned themselves into a frenzy.”

“Actually they were worshipping  at the foot of someone who’s  no longer human. She morphed into a digital idol. That was my experience last night,” the sharp-tongued senator said.

A lover of classical music, opera and  ballet, Santiago said she only watched the concert “for exposure, total  immersion.”

Read Next
Actor: TV comedy ‘Two and a Half Men’ is ‘filth’
EDITORS' PICK
Delivering delight against all odds
153 protests filed vs China actions in PH waters in 2021 — DFA
Lacson wants DOF to suspend TRAIN law as oil prices rise
Malls, parks in NCR still off limits to minors even with eased restrictions
Next level mobile photography within reach with vivo X70 co-engineered with ZEISS
Leaked: A 60x Zoom and all-new Helio G96 mean a complete overhaul for TECNO Mobile’s new CAMON 18 series
MOST READ
Robredo to supporters: Be calm, gentle and do good deeds
Matibag calls Senate budget hearing ‘political,’ gets kicked out
Duterte inaugurates P684-M bypass road project in Quezon
Duterte: No drug dealers among the rich in PH
Follow @MAgerINQ on Twitter
Don't miss out on the latest news and information.