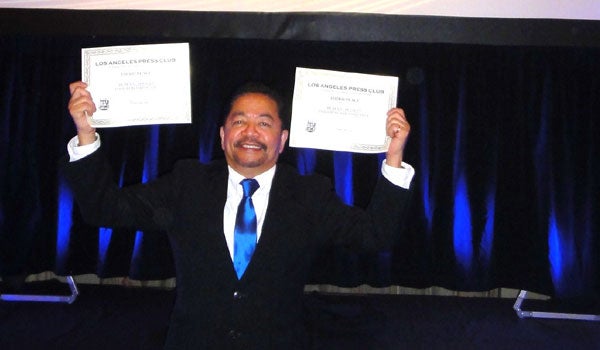 “I am humbled and honored to win prizes in both categories I was a finalist in, especially since I was competing against writers from mostly mainstream, large American publications. To win third prize for best column in a tie with someone from a giant tinseltown paper like The Hollywood Reporter is an honor,” he said.

“I was especially inspired to write about Martin Scorsese in my PDI column titled, ‘Childhood Isolation Inspired His Passion,’ because it was moving and inspiring to hear him talk about how being an asthmatic child nurtured his passion for cinema,” said Nepales.

He said winning third prize for his first book, “My Filipino Connection: The Philippines in Hollywood,” is “especially sweet because it is, in a way, a recognition of my passion and commitment to spotlight the Filipino talent excelling in the world stage.”

“I share the prize with all the Filipino personalities I featured who gave interesting interviews, my PDI entertainment editor Emmie Velarde who also edited the book, Letty Jimenez Magsanoc and Prosy Delacruz for their blurbs and the good folks at Anvil.”