Catch ‘The Script Live in Manila” on March 31, 2013 at Smart Araneta Coliseum 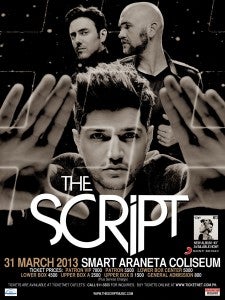 MANILA, Philippines—A special evening is in store for Filipinos as the Irish band The Script performs in Manila on March 31,2012 at the Smart Araneta Coliseum.

In a follow-up to the Irish trio’s highly praised sophomore album, “Science and Faith,” the bands latest album “#3”. The album’s much anticipated first single “Hall of Fame” made its premiere during the Today Show’s Olympic broadcast, to rave reviews. Featuring will.i.am, Black Eyed Peas member and Danny’s co host on The Voice UK, the inspirational anthem shines both lyrically and musically. The song’s official video has already gained nearly 23 million views on Youtube.

“#3”, The Script’s third album in just four years, may be the bands most “personal” album yet—with emotionally charged songs like “6 Degrees of Separation,” a lyrical recount of Danny’s traumatic split from a girlfriend, and “If You Could See Me Now” a tear-jerking tribute to both Danny’s late father, and Mark’s parents.

No strangers to success, the band’s first album, self titled: Timothy Powell of the BBC referred to The Script, as “fresh, vital and ferociously good.” Featuring the hit singles “The Man Who Can’t Be Moved” and “Breakeven” the album spent eight weeks in the top ten, was the twelfth best selling album in the UK in 2008, and the 198th best-selling album in 2010 in the USA.

The Script’s second album, Science and Faith, debuted at #1 in the UK selling 70,816 copies in its first week, and at number three on the US Billboard 200 with first-week sales of 49,000 copies. The album has sold 314,000 copies in the US, and over 1.5 million worldwide. “For the First Time” became the bands first #1 single with well over 1 million downloads.

To date they’ve sold more than four million albums, nine million singles, and have performed as both the hand-picked opener for U2 and Paul McCartney, and headliners playing their official biggest crowd ever in July of 2011— a sold-out crowd of 50,000 people in their hometown of Dublin.

Make sure to catch The Script as they perform all their hits live to their Filipino fans once again on March 31, 2013 at Smart Araneta Coliseum.

Tickets may be purchased from any Ticketnet outlets or at online at www.ticketnet.com.ph , starting Nov 15th 2,012. For inquiries please call 911-5555. (advt)