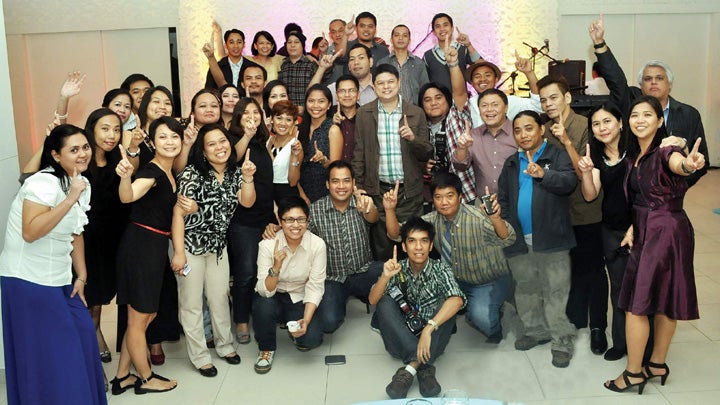 INQUIRER.NET management and staff led by its president, Paolo Prieto (standing, center, in checkered shirt), pose for a souvenir snapshot.

YOUNG band RunManila plays one of its original songs.

FLASH floods and traffic jams caused by Tropical Storm “Ofel” failed to dampen the 15th anniversary celebration of  INQUIRER.net, on Oct. 25 at the LAB Gastropub Oceana at the Mall of Asia complex in Pasay City.

The country’s hottest rapper, Gloc-9, jumpstarted the party with his originals “Martilyo,” “Balita,” “Sirena,” and a cover of FrancisM’s “Kaleidoscope World.”

Two top-rate rock bands, Callalily and 6cyclemind, made a surprise appearance and played a couple of songs.

JAY DURIAS sings his own hits.

TALENTED singers Thor and Suy team up for some upbeat numbers.

NOEL Cabangon gets a warm welcome.

R&B singer Thor added heat to the mood when he joined the band and sang a cover of Michael Jackson’s “Rock With You.” Then, slowing down with his version of Eric Benet’s “The Last Time,” Thor closed the set on a high note with Al Green’s “Let’s Stay Together.”

Just when the party people seemed exhausted from all the dancing and shouting, two young bands—She’s Only Sixteen and RunManila—gave a glimpse of their bright future by performing a couple of their original songs.

Earlier, INQUIRER.net president Paolo Prieto announced: “This year we are reaping the rewards of success and we are able to declare that we are No. 1.”

ANOTHER surprise guest band, 6cyclemind, works up the crowd.

CALLALILY makes a surprise appearance and plays a couple of tunes.

INQUIRER.net board chair Marixi R. Prieto pointed out the value of teamwork: “Being No. 1 is important because now we match our print (Philippine Daily Inquirer), which is No. 1 [in the country].”

Aside from carrying the print version of news stories from Philippine Daily Inquirer and having its own set of multimedia reporters, INQUIRER.net has been sourcing news from sister companies INQUIRER Bandera, INQUIRER Libre and Radyo INQUIRER 990 AM.

ANOTHER young band, She’s Only Sixteen, performs its own set of originals.