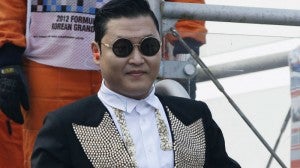 PARIS—South Korean pop sensation Psy caused a riot in Paris on Monday, drawing up to 20,000 people for a “Gangnam Style” flashmob held opposite the Eiffel Tower.

Alerted on social media by the record label Universal Mercury, together with radio station NRJ, a massive crowd packed the Trocadero square to join the artist in a rendition of his much-imitated horse-riding dance.

NRJ radio — which had put a video dance lesson online ahead of the lunchtime event — tweeted that at least 20,000 had taken part.

Psy performed his hit with four dancers, before an overwhelmingly teenaged crowd, with the whole event over within 15 minutes.

The video to “Gangnam Style” went viral after its July release, becoming the second most viewed clip in YouTube history, where it has notched up more than 650 million hits despite being sung almost entirely in Korean.

Almost overnight, the chubby 34-year-old singer, whose real name is Park Jae-Sang, was transformed into South Korea’s best-known cultural export, and a national hero at home.