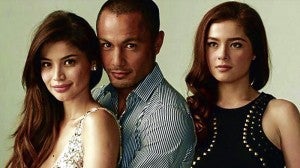 CURTIS, RAMSAY AND EIGENMANN. Fall short of the thespic mark.

Anne Curtis, Derek Ramsay and Andi Eigenmann were given attention-calling and challenging lead roles in their new co-starrer, “A Secret Affair,” but they all fell short, and the  “passionately” romantic film’s viewers were the poorer for it. —What went wrong?

In Anne’s case, she failed to come up with a compelling characterization, because she focused mostly on the external and superficial aspects of the role she played.

She looked lovely and desirable, of course, and was convincing as a woman who had everything. But, when her character got cold feet and backed out of her wedding to Derek, she revealed a huge psychological flaw that was not presaged by and prepared for by her sophisticated yet superficial portrayal.

Granted, some of the “blame” in this regard was shared by the movie’s script, which offered insufficient explanation for Anne’s act of “romantic cowardice,” which deeply hurt her supposedly beloved fiancé and led to his subsequent disloyal fling with Andi. But, the fault is chiefly Anne’s, because it’s the actor’s job to make a character’s actions believable, understandable and felt.

In “A Secret Affair,” too, Anne indulged in too much “lip acting,” perhaps in proud deference to her famously sexy facial feature. Yes, her luscious lips may be to die for, but they are not what acting should be all about!

For her part, Andi fails to measure up to the demands of her “boyfriend-grabber” role, because she’s patently too young and raw for it.

Sure, the character is young, spoiled and impetuous, but Andi was still supposed to make more than stereotypical and “hyper” sense out of her, and she didn’t. She focused too much on the young women’s passionate frenzy and desperate “love” for the man Anne had so cruelly rejected, and came across, not as their victim or attendant roadkill, but as a thoughtless and scheming victimizer herself!

A more experienced thespian would have provided clarifying shades and points of contrast to make the wanton character come across as more than just a black-and-white rendition, but these were not to be had in Andi’s angst-filled portrayal.

Finally, Derek Ramsay’s performance comes off worst of all, despite the opportunities the script gives him to reveal his acumen as an actor.

Alas, he fails to take advantage of those opportunities, perhaps because his entire acting career has been built around his being a gorgeous screen hunk. His latest starrer requires him to be much more than that, but despite his most earnest and strained efforts, his character is still mostly just a hunk.

The actor goes through the requisite motions to show that his character has all of the emotions required by his various crises and challenges in the course of the movie’s roller-coaster storytelling, but his heart just doesn’t seem to be in it.

This is a pity because, with his past box-office hits (“No Other Woman” and “Praybeyt Benjamin”), Derek is clearly the male lead of the moment. Despite his successes, however, he still hasn’t moved up the ladder in the thespic department, and that’s unfortunate. We hope that he will finally be able to lick this problem—by his next starrer, please?