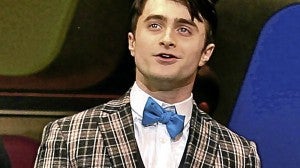 NEW YORK – Just a few minutes earlier, Daniel Radcliffe was larger than life onstage at the Al Hirschfeld Theatre, his joy in performing so infectious that he had the audience –which was ready to root for him to begin with – breaking into smiles and cheering him.

But the packed crowd was actually bowled over by Daniel’s singing and dancing prowess in this uplifting revival of “How to Succeed in Business Without Really Trying,” a winking satire of the ’60s corporate world.

So by curtain call, the “Harry Potter” actor had honestly earned the standing ovation, as did the wonderful John Larroquette, Tammy Blanchard and the rest of the company.

Now, standing behind the stage, Daniel looked fresh in a printed shirt, sleeves rolled up, dark pants and gray sneakers. The theater is deserted, while outside, a mob is waiting for him to come out. The “Potter” series is a phenomenon, with the critically well-received final installment breaking all sorts of box-office records. But its star remains the same Daniel Radcliffe we’ve interviewed over the years – humble, self-deprecating, with a bit of natural humor.

When we finished the interview, Daniel was met by a sea of humanity and flashing cameras. Below are excerpts from our chat:

How did you acquire that incredible voice?

I can assure you that it’s not an incredible voice. It’s a solid voice, one that gets me through eight shows a week safely and comfortably. But there are a lot of bigger singers than me … I’ve always enjoyed music. I’ve always sung along and stuff, so I suppose I’ve always had a kind of musical inclination in that sense. Three years ago, I started having singing lessons. I just loved it. My singing teacher is a great guy in England named Mark Meylan. He’s very funny and dry.

Were you able to reach those notes right away?

No. That has been worked on across the three years. My range got slightly bigger. But I’m not quite Freddie Mercury yet. 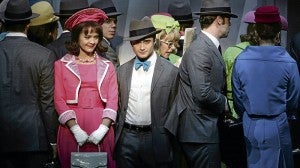 CAN DANIEL Radcliffe sing? Yes, and he dances, too, in “How to Succeed in Business Without Really Trying.”

That was an energetic performance. How do you unwind?

I go home and watch the History Channel or something. Nothing particularly interesting. Now that we’re more into the run, I’m less buzzing after each show. In the beginning, I would go home and I couldn’t sleep for like two or three hours. But now, I’m able to rest afterward.

Aside from the singing lessons, how else did you train for this marathon role?

I started doing dance lessons at the beginning of last year. When I wasn’t doing “Potter,” I did three hours (of dancing) on weekends. I was doing it every week for 12 months. The course gets you slightly more in shape. But it wasn’t until the rehearsals when you get the specific choreography of the show into your body. Eventually, you relax with it. Then it becomes less of a workout. I can now do “Brotherhood of Man” without getting totally out of breath and having to struggle in the next scene.

Sean Connery was very much identified with James Bond that he wasn’t able to break the mold for a long time. Your “Harry Potter” role could have easily been an albatross. Yet from “Equus” to this musical, you are able to break audience expectations of what you’re capable of doing. What has been more vulnerable to you, being physically naked in “Equus” or singing and dancing in this show?

“Equus” is a lot darker material so I felt definitely much more vulnerable there. But in terms of the Sean Connery thing, he did rather well in those James Bond movies and went on to greater things. But I think it’s also a different world now than it was then. In the ’60s and ’70s, you only saw the character. There wasn’t much awareness of the actor behind the character as there is now because you didn’t see them in the tabloids and magazines all the time.

Now, people are more used to dealing with that kind of dual reality of the character and the actor being separate things. Maybe it’s an easier time to try and break out of a big series and go on to different characters.

How is your bonding experience with the cast in “How to …” different from “Harry Potter”?

When I do film or TV, the biggest bond I have is normally with the crew. Because, particularly in the case of “Potter,” I was the only one who was there every day. Even Emma (Watson) and Rupert (Grint) were often not there. So the crew are the people I gravitated toward and hung out with.

In this show (“How to…”) it’s a different experience that you have of being in a cast. Because you really do rely so heavily on each other. You help each other out and be there for each other when stuff goes wrong. There’s a real company feel. We have a really great company. And that applies to not just the cast but also the crew backstage who are just as hardworking and happy to be here. But going though the rehearsal process, at certain times you’re all slightly vulnerable, messed up and thinking that you don’t belong there. You see each other through that phase which is lovely.

You left New York to attend the recent London premiere and then flew back here immediately.

Yeah, it was a great day. It sounds too cold and clinical to say “on autopilot” but it was almost like I was watching it all happen to somebody else. It was slightly kind of odd. I couldn’t believe that I was suddenly back here and was about to do the show again after I’d been in London. It was kind of bizarre. It was one of those things that I suppose tests the stamina. It’s nice to be reminded that you can do it.

Over the years, you’ve said in our interviews that you have a relatively normal life. You go to a “Harry Potter” premiere once a year. The fans scream and you wave. Here, that happens every night. The fans are outside, screaming and waiting for you to come out. How have you adjusted to this?

It’s not something that you get particularly adjusted to. It’s always something that makes you feel slightly awkward. You’re like, if you really hear me, I promise you won’t be screaming. There’s nothing to get that excited about. It’s all very surreal. The people scream and get so excited. Again, it’s a similar thing – it’s like it’s happening to somebody else. After a while, you tend to almost not hear it. It’s quite strange.

How long are you committed to doing the show?

Since the final “Harry Potter” movie’s box-office record is

a worldwide phenomenon, have you noticed anything different in the audience reaction during the show?

It’s interesting because at the moment, I imagine that what people will be doing is going from the film to the show. This show isn’t a “Harry Potter” thing but obviously, I’m here. There have been moments when people have been a bit more excited than usual. Somebody did call something out last Saturday night. But generally speaking, once the announcements have been made about no cell phones and no photography, everyone tends to chill out a little bit. But on the Saturday after the film was released, it was pretty hectic at the stage door.

You had the Harry Potter role for many years. These days, when you wake up in the morning, is that Harry Potter identity still in your mind?

It’s part of my identity in the fact that it was my first big job. But it’s not something that I wake up saying to myself. I’m fully aware that I’m not him. I suppose the truthful answer is, I don’t think about it that often. Although “Harry Potter” is responsible for almost everything in my day-to-day life – from my job to where I live – it’s not something that comes into my head all the time.

I would absolutely love to do another one. I’d love to do a new musical as well. That would be very exciting. My favorite musical, despite the fact that I’ve never actually seen it live – I’ve only seen recordings and listened to the cast album – is Sondheim’s “Company.”