Ghost from the past can ruin or save this actor 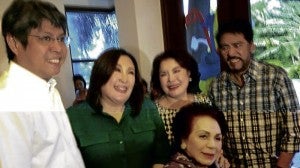 Hunky Actor is determined to reach the top. This blind ambition is motivated by filial loyalty, according to a highly placed source.

HA’s Disturbed Relative got in trouble with authorities. All his young life, HA tried to clean up after the mess. Now that he’s close to the Powers-That-Be, can he help DR stick to the straight and narrow path?

Was that the reason why he “befriended” a number of Influential Insiders? Will this ghost from the past ruin HA’s booming career?

Controversial Personality has a strange addiction. CP befriends fellow stars for a reason.

Highly competitive, CP is a firm believer in the adage: “Keep your friends close and your enemies closer.”

Apparently CP’s only reason to get chummy is to find out friends’ deepest, darkest secrets. CP wouldn’t think twice about blabbing about bosom buddies if it’s convenient.

Is CP behind that salacious rumor linking Famous Friend with Notorious Celebrity?

After a long estrangement, megastar Sharon Cuneta patched up her differences with aunt Helen Gamboa. Sharon said she made the first move by texting Helen.

When she felt the time was right, Sharon paid her “second mom” a surprise visit. Shortly after, Helen, accompanied by husband Sen. Tito Sotto and their children Apple, Lala and Gian (with their own kids in tow), attended the third birthday party and dedication of Miguel Samuel Mateo—Sharon and husband Sen. Francis Pangilinan’s youngest son, at Blue Leaf, McKinley Hill, on Saturday.

Zsa Zsa Padilla on undergoing stem cell therapy: “It’s something that I should study further, I guess.” (Many others should think this way, too.)

John Lloyd, asked if he was happy: “It’s beyond happiness.” (Good for you.)

“Startalk,” “The Buzz,” with Jodee Agoncillo