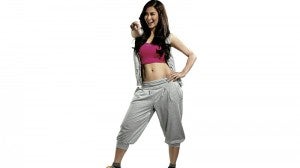 With over a week removed from the creature comforts of Subic where the inaugural series of the new “Extra Challenge” was filmed and the “harrowing” footage to be revealed to TV audiences starting Oct. 27, the show’s three hosts aren’t about to play spoilers and spill the beans.

Instead, they just want members of the entertainment press to get a “feel” of the reinvigorated “Extra Challenge,” now with the new tagline “Ang Bagong Hamon.”

During the October 18 press conference at the GMA Studio 7 formally introducing the show, hosts Richard Gutierrez and Marian Rivera roped down from the overhead steel scaffolding, while show co-host and comic relief Boobay (Norman Balbuena in real life) hosted the press con.

The three wasted no time in getting members of the entertainment media to participate in an “extra challenging” touch-and-tell game, where three willing participants were blindfolded and made to touch and identify the aquarium’s contents, which included a live snake.

Not much more details were added to what the press saw and heard on a rain-drenched Sunday during the October 7 on-site dry run for the show. The October 18 affair only heightened the excitement and anticipation for the re-load of an original Filipino reality adventure show last seen six years ago.

So, when these three were asked whatever happened to challengers Alessandra de Rossi, Kylie Padilla, Dennis Trillo and Rafael Rosell during taping, there were just knowing smiles, and the generic response, “Just watch what happens on the 27th.” 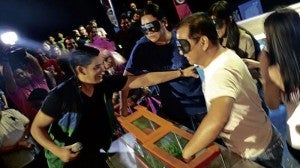 MEMBERS of the entertainment media get a “feel” of the new show.

Judging by what the press glimpsed during the set tour, the new “Extra Challenge” is poised to live up to hype as more of everything the show had been originally known for.

Marian, who hosts a reality adventure show for the first time, compared the original with the new: “Ito na ’yung tinatawag nilang mas pinatindi, mas pinatapang, may extra talaga [This is what is called more intense, more fearless, with something really extra].”

Boobay, who joins the show as the “extra” in “Extra Challenge” (according to the TV teaser), then interjected: “It’s gonna be big, it’s gonna be tough, and it’s gonna be me.”

The stand-up comedian, seen on GMA News TV’s “May Tamang Balita” and “Day Off,” is expected to provide the necessary comedic relief to what the show’s producers have declared a Halloween-themed series. 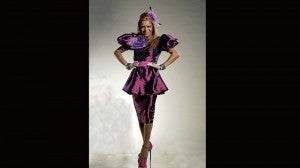 BOOBAY, Norman Balbuena in real life, is the “extra” in “Extra Challenge.”

During the recent site tour at an undisclosed wharf in Subic, select members of the press were given a “sneak freak” of the timber and tone of the new “Extra Challenge.”

In the first challenge, called “Ililibing Ka sa Langit,” celebrity challengers were chained and locked inside four transparent plexiglass coffins, then hoisted 60 feet above the pier’s waters. The challenge involved unshackling themselves, using the correct key mixed among numerous other keys placed in the coffin, then unlocking the coffin using another key, and jumping into the bay water, where they needed to swim the short distance back to dry dock. The first one on land was deemed the challenge winner.

After that, two more tests of nerves faced the four celebrities, the dread factor increasing every time. The show’s producers hinted there would be lots of running and booby traps during a nighttime challenge.

Program manager Patty Gutierrez explained that the challenges were all designed to exploit the contestants’ fears, as well as highlight the varied environs of Subic.

In the teaser video shown during the press con, glimpses of the other challenges were revealed, with scenes involving cemeteries, insects, snakes and zombies.

“The participants did not know anything about the challenges beforehand,” director Ivan Dedicatoria stressed, “other than the safety precautions and health requisites they needed to be briefed on before undergoing the challenges.” 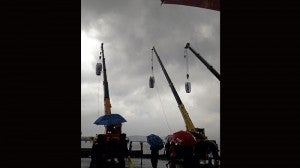 FRIGHT SIGHT “Extra Challenge” participants will get a different view of Subic once they’re strapped inside and locked in one of these transparent coffins.

And where Paolo Bediones, Miriam Quiambao, Mariel Rodriguez, Phoemela Baranda and Ethel Booba left off in 2006 in this ground-breaking GMA News and Public Affairs show, Richard, Marian and Boobay now throw in their own unique chemistry on the hapless contestants. The trio already know what sort of mindgames to play.

“But unlike ‘Survivor,’ it’s gonna be lighter. We’re gonna make it more fun for the audience and the challengers as well,” explained Richard, who is in charge of announcing the rules and regulations to the challengers.

For her part, Marian said in Filipino: “I’ll be their partner, who says ‘Ok, you can’t do it,’ but with a smile.”

Boobay said she’ll be the challengers’ “nightmare,” eliciting laughter even from his co-hosts.

If ever one of the contestants did chicken out of a challenge, would any of the hosts be game enough to take the test and be true to the original “Extra Challenge” format?

Richard, himself an extreme sports enthusiast, said he was fond of death-defying activities.