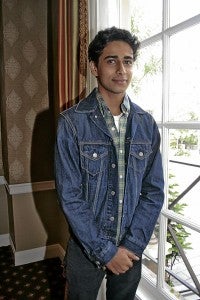 LOS ANGELES—Suraj Sharma was just accompanying his younger brother to audition for the crucial title character in Ang Lee’s “Life of Pi,” but ended up winning the role over 3,000 boys.

Ang recently told us the interesting story of how Suraj bagged the role of Piscine Militor Patel—whose nickname is Pi—a choice that would either elevate or sink the filmmaker’s adaptation of Yann Martel’s bestselling tale of courage, faith, perseverance and hope.

A casting agent asked Sriharsh Sharma, who had acted in two films, but was deemed too young for the role, “What about your brother?” The agent told Suraj to read for the part. That’s how Suraj began auditioning for one of cinema’s most coveted roles. He came close to being eliminated by Ang, who watched the audition tapes of over 3,000 kids. Then, after three rounds of auditions, the aspirants were narrowed down to 12.

“I went to Mumbai to meet and work with the kids,” Ang recalled. “I always saw this kid with his goofy glasses who did something interesting, but he looked dorky. I almost let him go, but I said, ‘Take off your glasses. Let me take a look.’”

Ang finally saw his Pi: “Not only does he have a compelling and wise look. He has this rare talent.” The director said that in the final round, Suraj gave one of the “most compelling readings we had. At the end, he was in tears.”

We’re glad to report that Ang made a very good choice in Suraj. The novice actor keeps us engrossed with his performance and holds his own, even in the scene-stealing company of a zebra, a laughing hyena and especially the tiger, Richard Parker.

“Everything was new to me,” Suraj said of his own journey, which is almost as compelling as the visually stunning tale successfully depicted by Ang onscreen. The role took Suraj to Taiwan, where much of the film was shot. The country has the world’s largest self-generating wave tank.

Understandably, the teen’s biggest concern was to be worthy of Ang’s trust. “My greatest fear was not making Ang happy,” Suraj revealed. “It was important to keep Ang satisfied, because he had given me this opportunity. I had to give it my best.”

The New Delhi-based actor said of his highly respected, soft-spoken director: “Ang knows what he wants and gets it. He is a genius…he is kind of like God, but he’s a simple person. He’s down to earth and humble.”

Ang was impressed by Suraj’s endurance and patience in staying on the boat in the water tank for many hours.

Thanks to CG wizardry, Suraj really didn’t have to battle it out for boat space and territorial rights with a live tiger. With amazing advances in CG technology, Richard Parker looks real. But, four actual Bengal tigers did contribute some performance work and served as physical and performance references to the CG crew.

Asked what he personally learned from the tiger figure, Suraj answered, “You can learn from the tiger that some of the biggest challenges you face can be some of the things that actually keep you alive. It also teaches us that what we would see as unrelated are often interconnected, like in this case, Richard Parker needed Pi for food and water. At the same time, Pi needed Richard Parker to save himself from insanity, from complete and utter loneliness. So, they needed each other.”

As for the film’s spiritual aspects, Suraj remarked, “The movie has so many layers. Everybody will have his own meaning. For me, it’s about that feeling of hope, the search for truth, which is common to all religions.”

The amiable new star stressed that he has no expectations. “I don’t know what’s going to happen next. I will see as it comes. It’s been surreal for me, coming from a place where I never imagined any of this.”

With a laugh, Suraj explained the metaphorical tiger confronting him: “Right now, the release of the movie is the tiger that I have to overcome. After that, I don’t know. There will be a new tiger on the boat by then.”