US actor Danny DeVito splits from wife of 30 years 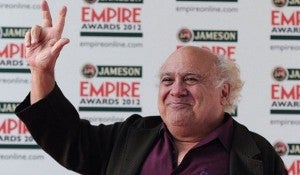 LOS ANGELES—US comic actor Danny DeVito has separated from his wife of 30 years Rhea Perlman, his spokesman said Monday, ending one of the longest marriages in Hollywood.

The diminutive actor, 67, and actress Perlman, 64, married in 1982, 12 years after meeting when she went to see a Broadway show he was acting in, “The Shrinking Bride.”

Both of them acted in the hit TV show “Taxi” in the late 1970s and early 1980s. Perlman went on to perform in “Cheers” and stayed in television, while DeVito moved more on to the big screen.

His credits include 1975’s “One Flew Over the Cuckoo’s Nest,” “Batman Returns” in 1992 and “LA Confidential” in 1997. He voiced the Lorax in this year’s animated blockbuster “Lorax.”

DeVito’s publicist Stan Rosenfield confirmed their separation in an email to AFP, but gave no more details. The couple have three grown-up children.