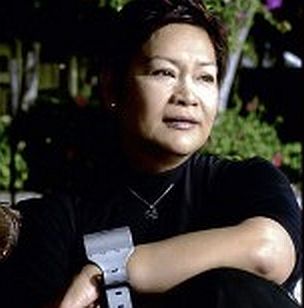 MANILA, Philippines—Multi-awarded filmmaker Marilou Diaz-Abaya passed away at 6:30 p.m. on Monday at the St. Luke’s Hospital in Taguig City, after a five-year battle with cancer, her son Marc said. She was 57.

Only last September, Abaya posted this on her Facebook site: “The cancer cells in my brain have been reduced significantly since my radiation program three months ago. I’m off chemo for a whole month.”

Abaya also said she would just take hormone pills, which “would hopefully relieve me from the usual side effects.”

She had also planned to be “more physically active during this respite period.”

The award-winning director was diagnosed with breast cancer in 2007. Her health improved in 2008. Abaya’s illness returned the following year. It was gone again in 2010 and recurred in 2011. “Now it’s stage 4, but she’s fighting it,” said Marc in an interview with the Philippine Daily Inquirer last month.

Marc, who is an actor and the frontman of the rock band Kwan, also said that “on bad days,” his mother relied on painkillers, but “on good days” she used her time to show support for her sons’ numerous endeavors.

In 2001, Diaz-Abaya was awarded the Arts and Culture Prize of the Fukuoka Asian Culture Prizes. The Fukuoka award is a highly prized honor awarded to Asians who have distinguished themselves in the field of culture. Her works “blends entertainment, social consciousness, and ethnic awareness,” according to the citation.

Her films have also been exhibited at festivals Munich, Dusseldorf and Fukuoka. Her 1998 masterpiece “Jose Rizal” was exhibited as the closing film at the Guggenheim Museum in New York City in March 1999. The film-and-video exhibit “Empire and Memory” marked the centennial of the 1899 Philippine-American War.

She was 2005 Women for Peace co-nominee for the Nobel Peace Prize.

Born on March 30, 1955, in Quezon City, Diaz-Abaya graduated with a Bachelor of Arts, major in Communication Arts, degree from Assumption College in Makati in 1976. She obtained her Master of Arts in Film and Television from Loyola Marymount University in Los Angeles in 1979, and pursued post-graduate studies at London International Film School.

She was founder and president of Marilou Diaz-Abaya Film Institute and Arts Center, and film instructor at the Ateneo de Manila University.

Diaz-Abaya was married to filmmaker Manolo Abaya, with whom she had two sons, Marco and David, who is a cinematographer.—With Almi M. Ilagan, Inquirer Research