Show us your mask! | Inquirer Entertainment

Show us your mask! 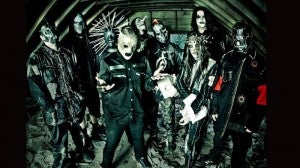 Slipknot, the veterans of the metal genre, and not only of nu-metal since that latter distinction is one the lead singer Corey Taylor has denounced numerous times in interviews, as he considers his band as a diverse and accomplished group of musicians and not mere products of a single movement only.

Rightfully so, since they have been performing and releasing records on and off for more than a decade already, plus they have a Grammy under their belt. That only further solidified that they are to be taken seriously and not “boxed in” to one sound.

Having said that, I still remember when I first got a taste of their music years ago. It intimidated me at first. One of their first hits was the song “Wait and Bleed”. It was heavy and dark. But their aggressive style of playing eventually grew on me and from then on, it led me to indulge into their follow-up releases.

The mask-wearing band was and always will be one of my favorites and guilty pleasures. Even when the years of bands like them dominating rock stations and music channels did come to an inevitable end–as almost music genres do and no matter how popular their artists might be–we all at one point can sometimes outgrow them and move on to the next artists we fancy. It is the way it is, I guess, as it is part of growing up.

But a part of me can’t but help listen still to bands like Slipknot no matter the disliking of others that might be towards the band, And no matter how the current trends of music  dictate that we all should mindlessly follow whatever is trending and popular. And forget that we actually have our own respective tastes in music and the fact that we can all develop discernment in music.

At this point, I could not care less frankly what others think since their music appeals to them and my kind of music still appeals to me for many reasons as well. Sometimes I just want to get away and seek refuge from the barrage of dance-pop songs from all directions. And songs which have the same artists featuring the same small group of artists. I need to find my comfort zone–my shelter, so to speak–and a place where I can be myself. Nothing comforts me more than to hear hard rock, metal of all kinds, and songs that simply explore the talents of artists and not limit them.

There will always be time for the Justin Biebers and Carly Rae Jepsens. But let me have this one. And that is the right that we all have–to simply like the music we enjoy listening to. So while others will listen to “Call me maybe” again, I am going to play “Vermillion” once more and think of better times.