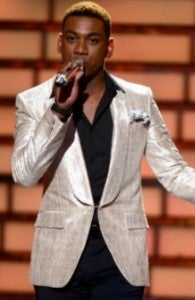 Here’s  part 7 of the Inquirer miniseries on the Top 10 finalists of “American Idol” Season 11, who will perform live on Sept. 21 at the Smart Araneta Coliseum.

She first auditioned for Season 10 of “American Idol,” but was such a bundle of nerves that she was reduced to tears before she could even sing.

The judges told her to come back when she had calmed down, and she proceeded with the Miley Cyrus hit, “The Climb.” She got through every round in Hollywood, but was cut before the live shows.

Hollie auditioned for Season 11 with more confidence, singing Alicia Keys’ “If I Ain’t Got You” and Adele’s “Someone Like You.” She breezed through the elimination rounds till she reached the Top 25 live shows, where her vocals shone via Christina Aguilera’s “Reflection.”

Her voice was always lauded by the judges, but she was often criticized for dressing too old for her age and not showing her fun, young side. She was advised to loosen up and not “over-think” her songs.

She got to deliver stunning performances of another Adele song, “Rolling in the Deep,” and the Dusty Springfield classic, “Son of a Preacher Man.”

She earned her first standing ovation when she reprised “The Climb,” and got positive feedback from the judges after singing the Ike and Tina Turner hit “River Deep, Mountain High” and the Leona Lewis tune “Bleeding Love” during the 1960s/British pop week.

But after a lackluster performance of the Bonnie Raitt tune, “I Can’t Make You Love Me,” Hollie was sent home, finishing at 4th place.

Known for his soaring, soulful voice, Joshua Ledet grew up singing in a local church in Louisiana. He would later say he had been inspired to pursue a singing career after Fantasia Barrino won Season 3 of “Idol.”

Although ecstatic upon getting into the Hollywood rounds of Season 11, Joshua almost backed out due to his fear of flying. Even so, he  went on to become one of the most electrifying contestants onstage. His numbers were well-received by judges and viewers alike, and his similarities to Fantasia led people to call him “Mantasia.”

He set a record 18 standing ovations on the show—the most in “Idol” history so far.

One of the judges, Jennifer Lopez, made a fearless Final 2 forecast after Joshua and Jessica Sanchez’s outstanding version of the Aretha Franklin and George Michael duet, “I Knew You Were Waiting (For Me).”

In the Top 3 rounds, his renditions of the blues classic “I’d Rather Go Blind” and John Lennon’s “Imagine” were lauded as usual, but his final number, the Mary J. Blige tune “No More Drama” failed to take him to the finale. He finished at 3rd place.

Phillip Phillips, the raspy-voiced singer-songwriter from Leesburg, Georgia, learned to play the guitar at age 14.

He first auditioned for “America’s Got Talent” Season 2, but was turned down.

When “Idol” auditions were held in Savannah, Georgia, Phillip tried out again. He first sang Stevie Wonder’s “Superstition,” but it was his acoustic version of Michael Jackson’s “Thriller” that stunned the judges—prompting Jennifer Lopez to comment that he performed as if electricity was running through his body.

He sailed through all the rounds and solidified his status as a top favorite with his version of Usher’s “Nice & Slow” in the final judgment.

Most of Phillip’s performances were stamped with his own sound—he arranged all his solo numbers.

Throughout the competition, he preferred singing songs by his musical influences which included the Dave Matthews Band, Jonny Lang, Damien Rice and Genesis.

Phillip—who cornered the female votes alongside Colton Dixon—was the only Season 11 contestant to have never made a trip to the Bottom 3.

During the battle for the Top 2, fellow contenders Joshua Ledet and Jessica Sanchez earned praises from the judges; Phillip’s performances were deemed average—until he interpreted Bob Seger’s “We’ve Got Tonight” which blew away the competition.

He went on to perform an original composition, “Home,”  widely regarded as the best “Idol” coronation song.

Read Next
How Jennifer Lawrence has kept a grip on reality since ‘Hunger Games’
EDITORS' PICK
1,797 more Covid-19 infections raise PH active cases to 33,603
New Year, New Rediscoveries
Acer Philippines welcomes you to its first flagship store
UP president challenges AFP claim on Reds’ campus infiltration
WHO says fabric facemasks still work against virus variants
Is your company a growth champion? Stand up and be recognized!
MOST READ
Wife stabs husband after seeing her younger self in old photos, thought he was cheating
NBI files raps vs top execs of 2 tech firms
Ate Vi’s message to those against ABS-CBN’s franchise renewal
Cop, 12 others killed in Maguindanao shootout
Don't miss out on the latest news and information.