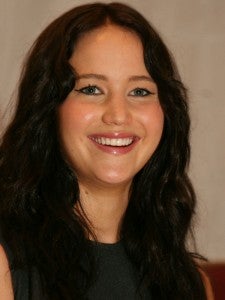 LOS ANGELES—“I’m young so I still have that meltdown potential,” Jennifer Lawrence said during our recent interview at the Fairmont Royal York Hotel in Toronto. “Stay tuned,” she added.

Keeping a grip on reality, especially for a young woman like Jennifer—who was thrust into fame after bagging the Katniss Everdeen role in “The Hunger Games” trilogy—was the main subject of our conversation. It was brought on by the theme of her Toronto Film Festival entry, David O. Russell’s “Silver Linings Playbook,” in which a man (played by Bradley Cooper) returns home after a long stint in a mental health facility.

The Golden Globe and Oscar best actress nominee for “Winter’s Bone” is back to being a brunette for “The Hunger Games: Catching Fire,” the second movie in the trilogy based on Suzanne Collins’ book series. “I think dark gets more like, ‘Whoa!’ but that’s probably just because I’ve always been blonde,” she explained people’s reaction to her hair color changes. “No matter how many times I dye my hair black for the movies, my family still can’t get used to it. Every time they see me, they’re like ‘Whoa!’ I still have trouble getting used to it.”

With a grin, she continued: “If I wake up in the middle of the night to pee and I see myself in the mirror, I’m always scared at first.”

The actress maintained that nothing had really changed significantly for her. “Fame and celebrity are such simple, predictable things that I’m not totally in awe of them,” she said in her husky voice. “It makes complete sense. You have a job where people recognize you. For some reason, they think you’re not human. I do that, too, so I get it. I met John Travolta two weeks ago and I almost threw up. [But] I’m not really freaked out by it. It’s not really dramatic. I just move on.”

There’s been only “one really traumatic day” for Jennifer and that was when “The Hunger Games” came out. She recounted, laughing: “I went to Whole Foods, like I did every morning, to get my coffee and a smoothie. There were 15 paparazzi. It happened so quickly—overnight. It’s jarring to watch these freedoms in [my] life being taken away. Two weeks ago, I made the mistake of thinking I could pump my own gas. It’s heartbreaking.”

She clarified: “At the same time, it’s not as dramatic as you think because it happens only in LA. As soon as I’m out of LA, it’s over and gone.”

Jennifer revealed that she didn’t have famous friends to advise her. Not that she’s griping. “There are normal friends that I’ve had for most of my life. I find that it’s more comforting to keep things the same and just be normal, than to have people tell me how to act now that I’m famous.”

Now chuckling, the actress said, “Well, my hotel rooms are nicer; the apartments, bigger. A friend told me that, for her, that was the only thing that had changed. I was wondering how my fame had affected my friends. They were like, ‘We’ve got nicer places to hang out.’”

Home for Jennifer is still the two-bedroom condo in LA that she’s had for several years. “It’s the same place since I moved to LA,” she pointed out. “It’s pretty low-key. I should probably get a house but I don’t really know if I do want to live in LA. I don’t like going out that much. I’m kind of an old lady. After 11 p.m., I’m like, ‘Don’t these kids get tired?’”

Reminded that she’s only 22, the “old lady” smiled and remarked: “I know! Every time I’m out, I think about my couch. I’m like, ‘That would be awesome right now—I bet there’s a new episode of ‘Dance Moms’ on [or] a new episode of ‘Keeping Up With the Kardashians’ that I’m missing. I’d like people to come over to my place. My condo is the reality TV show cave. I just learned how to work TiVo—that has changed my life. I don’t even want to work anymore.”

That’s her “silver lining”— watching reality television. She dished: “At the end of the day, nothing makes me feel better than junk food and reality TV.”

Even with her reported eight-figure pay for the “Hunger” sequel, Jennifer admitted that she still often experienced what she called “phantom pockets.” She explained: “I’m in the grocery store and I’m like, ‘$12 for a case of water? That’s crazy.’ But I get valet. I used to always drive, never valet, because it was like $6 which really means $10 because it’s embarrassing to ask for my change.” Again laughing, she said, “Now, I valet. I tip a lot bigger because that’s fun.”

Asked about the strangest fan mail she ever got, Jennifer answered: “Probably the ones that are addressed to my home and arrive in my home mailbox—which is very unsettling and bizarre. Then in the entire letter, they’re telling me how it’s not crazy that they got a hold of my home address.”

Bodyguards are still something she’d rather do without. “I’m not very good at coping with them yet,” she commented. “I’m hoping that I’ll be able to live in LA and live with it. But right now, I kind of avoid LA because I’m not good at handling it. I don’t want to travel around with a bodyguard all the time, so I kind of hide.”

On whether she has ever felt “empty” as Tiffany, her widow character in “Silver Linings,”  Jennifer replied: “One of the biggest things that I’ve  tried to work on for myself—it was a New Year’s resolution—standing up for myself. Nobody wants to be disliked; you always want to be polite and nice. I sometimes end up allowing myself to get walked over. I end up resenting and feeling, as Tiffany says, ‘empty.’ I think everybody does that because it’s a natural thing to want other people to be happy. You forget about what you want or put it in the back burner.”

Jennifer grinned when asked about dancing with Bradley in “Silver.” She said: “My dancing is abominable—probably the worst anybody’s ever seen. I have no dancing background. I dance like a mom at a high school prom. That was really fun for me and probably a lot worse for Bradley. He’s a great dancer. He picked it up right away. I have no control over my limbs.”

In the film, Jennifer holds her own against Robert de Niro.  “That was incredible,” she said about working opposite the acting legend. “He’s an icon but, when you get to know him, he’s just so sweet, charming, nice and real.”

She went on: “I don’t know where the confidence came from because I never read my lines the night before work. I normally just wait until I show up on the set. One day, randomly, I was like, ‘Why don’t I look at what scene I’m doing tomorrow?’ It was that page-and-a-half of monologue. I was like, ‘Oh my God!’ I showed up and felt I had barely prepared. He was wonderful. We just did it. He’s very supportive. He has a way of looking in your eyes… it’s not intimidating, not like he’s looking through you. He’s a very comforting presence.”

Jennifer revealed she was “devastated” when “The Hunger Games” writer-director Gary Ross decided not to return for the second film, which Francis Lawrence is directing. “When I first heard the news, I was devastated because I adore Gary,” said Jennifer. “I didn’t see it coming. I couldn’t understand. I called him and he basically said, ‘I don’t have time to give 100 percent to this movie.’ My devastation was replaced with respect for him for stepping out when he felt that he couldn’t give his all. So, as much as I miss him, I completely respect him for making that decision.”

Of the new director, she said: “Francis is absolutely amazing. The actors feel very free; he’s not controlling at all. He knows everything inside and out so you feel supported. I’m really happy.”

Looking into the future, Jennifer once more showed her pragmatic side: “I tell myself I’m not going to be relevant forever.” Breaking into a laugh one more time, she said: “It’s impossible (to stay on top). There are always only a few more years.”