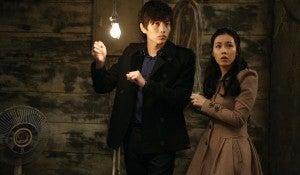 STARS Min-ki Lee (left) and Ye-jin Son in “Spellbound,” which beat Hollywood blockbusters at the tills

With the possible exception of India’s Bollywood, the Korean cinema industry seems to be the most bustling in the region, observed Filipino filmmaker Tikoy Aguiluz at the “Hallyu in the Philippines” forum held at Makati’s InterContinental Manila Hotel last Friday.

“Hallyu” is the term coined by Chinese media to describe the “Korean wave” that swept fans of pop music, TV shows and movies in the region and beyond.

Debuting Korean filmmaker In-ho Hwang offered an explanation for the success of his nation’s cinema among critics and audiences.

(Kim Ki-duk’s “Pieta” won the Golden Lion at the last Venice fest. Jae-yong Kwak’s “My Sassy Girl” and Hyun-seung Lee’s “Il Mare” were remade by Hollywood. In the works are proposed Hollywood remakes of Chan Wook-Park’s “Old Boy” by Spike Lee and Hong-jin Na’s “The Chaser” by Martin Scorsese.)

“While in Japan and Europe, artistic merits are emphasized… Korean movies focus on the story,” Hwang told the Inquirer in an exclusive interview. His country’s filmmakers employed American genres to tell distinctly Korean stories, Hwang said.

He also noted that government support proved crucial in the struggling days of Korean cinema in the 1990s. “Koreans didn’t care for our own movies before,” Hwang related. “They seemed to think Korean films were cheap.” Then a Screen Quota System was instituted. “Local cinemas allotted 146 days in a year exclusively to Korean movies.” Thus, the whole world witnessed the blossoming of Korean cinema.

But the number was cut by half in 2006, he said. In 2007, South Korea signed the Free Trade Agreement with the United States. “Now, only 73 days are reserved for Korean films.” At first, Korean actors, producers and directors were worried, Hwang recounted. “But because the Korean film industry was al-ready stable by that time, we had no problem competing with foreign films.” 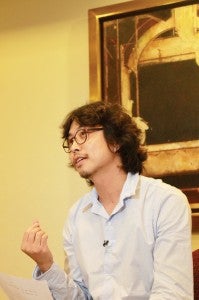 FILMMAKER In-ho Hwang says “storytelling” spells the difference between a hit and a flop.

The Korean Film Council, an autonomous nongovernmental organization, is subsidized by the government to promote the nation’s cinema all over the world, said Aguiluz.

The amazing success story that is Korean cinema best illustrates cooperation between the government and private sectors, said Hwang. “Since film production became a lucrative business, major companies started investing in movies, systematizing filmmaking and increasing the quantity and quality.”

“When we make films, we don’t target foreigners, but we market the movies for distribution abroad,” said Sang-hoon An, producer of “Spellbound.”

“Spellbound,” which tells the story of a magician who falls for a lonely girl who sees ghosts, effortlessly juggles three genres—romance, comedy and horror.

Hwang cautioned other filmmakers against following this risky move. “It’s easy to fail if you mix genres. I’d like to think that my film is basically a love story with horror and comedic elements.”

He looks up to David Cronenberg and Joon-ho Bong as influences. “Cronenberg’s movies, like ‘A History of Violence,’ are very dramatic, but he doesn’t exaggerate. He concentrates on people’s stories rather than technique,” Hwang explained.

He admires Bong, who directed Korea’s biggest hit so far, “The Host,” because “he tells the story of underdogs and marginalized people quite well.”

Hwang is working on his second film, “Monster.” “It’s a thriller about a woman with mental disability whose child is murdered. I want to tell the stories of people who live on the margins of society. They are the most vulnerable and helpless.”

“Spellbound” is one of seven films featured in the Korean Film Festival: Family Time, which opens tomorrow at SM Megamall Cinema 9. It will run until Sept. 23.

Spearheaded by the Embassy of the Republic of Korea, the Film Development Council of the Philippines and SM Cinema, the Korean fest will move to SM Baguio Cinema 2 (Sept. 26 to 30) and SM Cebu Cinema 3 (Oct. 3 to 7).