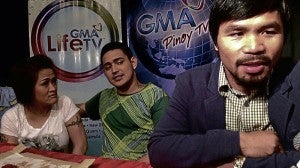 There’s a new monkey on the “Batibot” block. Enchong Go recently joined the cast of the children’s show, now on its fourth season on TV5.

The stint is a dream-come-true for Enchong’s puppeteer Wanlu, a Hall of Famer on TV5’s talent search “Talentadong Pinoy.” Wanlu told the Inquirer: “Every Filipino puppeteer dreams of working in ‘Batibot,’ a show that we all grew up watching.”

He said he had to pinch himself the first time he shared the green screen with Manang Bola (and her puppeteer Priscilla Rose Nalundasan) and the rest of the gang—Koko Kwik Kwak, Kapitan Basa, Sitsiritsit at Alibangbang, Ningning at Gingging and hosts Ate Maya and Kuya Fidel.

But the gig presents a unique challenge for Wanlu, who usually writes his own material. “My scripts for ‘Batibot’ should be educational. It’s like I’m preparing a lesson plan. For my first episode, Enchong discussed the difference between monkeys and apes.”

“Now my 4-year-old son Elijah watches ‘Batibot,’” Wanlu said proudly. Among the topics that “Batibot” is tackling this season are water safety, protecting and caring for the environment, safety at home, family life and activities. 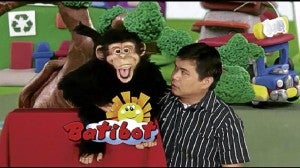 Wanlu regularly goes on campus tours as well, to introduce puppetry and ventriloquism to elementary and high school students.

He does special shows for the cancer ward of the National Children’s Hospital. “It’s fulfilling to make these little angels smile and laugh,” he said.

Enchong the puppet is also a regular “talent scout” in the TV5 talent search “Talentadong Pinoy Kids,” which airs Saturdays and Sundays, 7:30 p.m.

Wanlu explained: “Enchong’s role is to make the young contestants forget the tension. He’s the comic relief. The kids have fun interacting with an animatronic puppet like Enchong. They think Enchong is a real monkey since they don’t see me—I operate the puppet by remote control.”

Wanlu is amazed by the virtuosity of the young aspirants—from the usual singers and dancers to uncommon performers (violinist, gymnast, flag bearer). “There was even a young kundiman singer. It doesn’t look like the kiddie edition of ‘Talentadong Pinoy.’ It’s like the big league already.”

This month, Wanlu will travel to Vietnam to join the Hanoi International Marionette Festival. “I’m interested in Vietnam’s water puppets,” he said.

In November, he will attend the Asean Puppetry Festival in Singapore. He said he picked up a lot of pointers and new techniques from last year’s festival held in Kuala Lumpur. Bayani S. San Diego Jr.

Boxing champ and Sarangani Representative Manny Pacquiao, who hosts the game show “Manny Many Prizes” on GMA 7, has to be repeatedly reminded to not give away too much money on the program, said Kapuso executive Redgie Acuña-Magno.

The money that Pacman hands out on the show almost always comes from his own pocket, revealed Magno, who is the network’s assistant vice president for drama. Pacquiao continues to give cash to audience members even after the show goes off the air, Magno added. 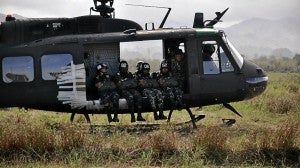 During a recent media gathering to promote the program’s live US shows this month, Pacquiao said: “Yes, we do that, especially when no one wins the jackpot prize. This way, more families can put up a small business, start their lives anew.”

He believed he had been “put here to help people and encourage them to have a good relationship with God.” Pacman is a born-again Christian.

His co-host on the show, Gladys Guevarra, said she felt blessed to be part of that endeavor. “I sometimes act as a letter courier for Ninong (Pacquiao’s nickname on the show). And I myself grant people’s requests—when I can afford to.” But more often, she said, she would hand the letters over to the production team.

Magno said the tickets given to members of the live audiences are color-coded. “We can tell if a ticket is fake with just one look,” she added.

As part of GMA Pinoy TV’s 7th anniversary, the show will have a two-part presentation at the Gibson Amphitheater of Universal Studios Hollywood in Los Angeles, California, on September 16.

Two versions of the show, titled “Kapuso Goes Universal with Manny Many Prizes,” will be aired locally on October 7 and 14. Pinoys abroad will have the chance to win cash prizes of up to $20,000 for relatives in the Philippines.

The LA show will feature some of the biggest Kapuso stars—Dingdong Dantes, Solenn Huessaff, Rochelle Pangilinan and the tandem of Elmo Magalona and Julie Anne San Jose.

Joining Pacquiao are regular co-hosts Guevarra, Paolo Contis, Rhian Ramos, Pekto and Onyok Velasco. Tickets will be sold at $80, inclusive of a whole-day pass for rides at the theme park. Marinel R. Cruz

History Channel provides a glimpse into the grueling training for recruits of the Philippine Marine Corps Reconnaissance Battalion on “Special Forces,” Sept. 9 at 10 p.m. (reruns on September 11 at 10 p.m., September16 at 11 p.m. and September 30 at 10 p.m.)

The PMCFRB is called to duty when high-risk special operations missions need small elite teams for infiltration and assault. They are a rapid-deployment strike force trained in intelligence gathering, counterterrorism and unconventional warfare.