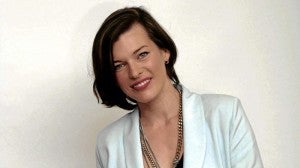 LOS ANGELES—In a recent interview, Milla Jovovich dished about the disparity between how she looks on the movie set and at home with her husband, Paul W.S. Anderson, who directs her one more time in “Resident Evil: Retribution.”

“My poor husband—that’s always the curse of being married to a celebrity girl because she gets photographed, all working out for the camera… sexy,” the super model-turned-actress said. “Then she comes home, puts on her sweats and watches ‘Game of Thrones’ on TV. Her husband is like, ‘Wait, that’s not you though, right? Which one did I marry?’ But I try my best.”

Milla, married to Paul since 2009 (they first met in 2002), revealed how both of them work at spicing things up: “We have times when I bring out my super-cute role-playing. Like, ‘Knock, knock, who’s there? Delivery. But sir, I never called for delivery. Well, you got one now.’ Woo hoo! You have to be creative after 10 years, right?”

Asked what little things Paul does to make her happy, Milla quipped: “Oh my goodness—special package.” Then she said: “What doesn’t he do? I made a great choice for a husband. It’s amazing when I think about some of my friends who go in and out of relationships and have children with one guy and with another guy, or who date guys who cheat. It’s always a big drama.” 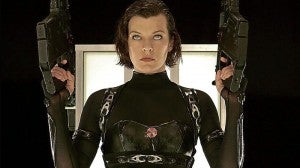 She continued: “Our life is not dramatic, but my goodness, I couldn’t have married a better husband. I feel so blessed. This is a small thing, but for instance, when I have to get up at 5:30 to do press, he’ll get up at 5 to make me tea. He’ll turn on the light and give me tea in bed. He’s so sweet and respectful.” Then Milla cracked with a smile: “Until he’s in the bedroom—he’s a bastard. The tea has its price.”

Milla admitted that working closely with talents for long periods of time, as in making films, nurtured her romance with two directors—Luc Besson and Paul, with whom she has a daughter, Ever, 4 years old. “I fall in love with the people I spend the most time and relate with the most,” she said. “With Paul, it was the same thing. We did a first movie and, before we knew it, a second. We’ve now spent a decade together.”

Of Luc, Milla said: “When we did ‘The Fifth Element,’ we spent six months prepping and then another eight months shooting. So, when you think about the fact that I was 19 years old, this was the most unbelievable man I had ever met in my life—so inspiring, strong, intelligent and such a talent. We were spending every day together and not seeing anybody else. When you spend that much time together, it’s hard not to fall in love because all you’re doing is relating to each other. I was his dream. I was Leelo (her character). That was his perfect being.”

With a laugh, Milla remarked: “It would have been strange had Luc and I not gotten together the way we did. That would have been, ‘Wow, they were such strong people that they could spend almost 24 hours a day together and not have some sort of love.’ There’s a reason that a lot of actors end up with directors or other actors—because you spend a lot of time together and you don’t see other people. It’s not like you go to eHarmony.com and go, ‘Hi, I’m Milla. I’m an actress and I’m tired of dating directors and marrying them. Is there anyone who wants to date me?’” 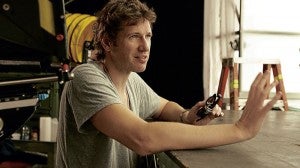 What Milla is not tired of is playing Alice, the original character she created for the five “Resident Evil” films. “It’s been a decade but listen, I love Alice and I could never be tired of her world because it’s so fantastical,” she explained.

Chuckling, Milla pointed out: “My life is pretty much spent either at home or in conference rooms, doing press junkets or interviews… So Alice’s life is much more exciting. To be able to go on the set and do those crazy stunts… the last time we were on the set, they chopped the top off a car the way you take the top off an egg or a champagne bottle with a knife. We did that with a taxicab. How can it get any better?”

Milla elaborated on her character in the franchise that has become the most successful film series to be based on video games: “I love the character, especially in this movie where the story line of the suburban Alice having a child and a family—gives my character humanity that I think she lost after the first movie. In that one, she was this innocent human being and then slowly, she became more bitter and isolated. Now, she’s finally gotten in touch with her humanity again, which is wonderful.”

The worst thing for her, Milla said, was “to watch a film where it’s action, action, action, but in the end, you don’t care who lives or dies… Even worse, you’re rooting for the bad guy because he’s more interesting than the good guy. You really have to love the people in an action movie. Giving Alice humanity has made her more relatable, especially to females.” 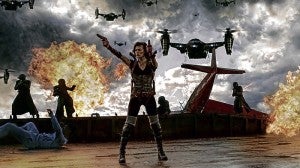 THIS girl’s life is much more exciting than hers, the actress says.

Milla is not ready to give up the role that earned her the title: “Reigning queen of kick-butt.”

She declared: “I would like to do one more. We never talked about sequels. The sequels just came because we didn’t want to jinx ourselves. But Paul definitely wants to finish the story. When he did ‘Resident Evil 4’ in 3-D, he wanted it to be part of a trilogy with number 6 being the end. He didn’t really think of it in detail, but now, he’s got a bit of a story line. Of course, we would like to do it, but the fans decide that.”

Milla has come a long way from her life as a young Russian immigrant in the United States who was often teased in school as a “commie” or “a Russian spy.” Her parents struggled with their new life in America.

“My mother was a movie star in Russia,” she recounted. “My dad went to medical school in Russia, but when we defected to America, everybody had to start from zero. My parents were working as housekeepers for Brian De Palma when we first moved to America. My dad was going to medical school during the day and keeping two jobs at night. So he was never around. My mom took care of me. She pretty much taught me what she knew. Because we were immigrants and we were starting from zero, everyone felt the responsibility to do his part. For my mom and me, it was like, we have to work. We have to help the family. That was our life.”