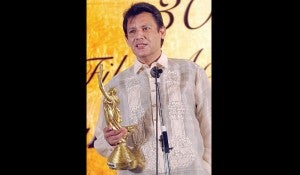 The film that was disowned by its director has ended up a big winner. “Manila Kingpin: The Asiong Salonga Story” bagged the best picture trophy, plus five other honors, at the 30th Luna Awards of the Film Academy of the Philippines (FAP) on Sunday night.

The film, a coproduction of Viva Films and Scenema Concept International, courted controversy when it debuted at the annual Metro Manila Film Festival in December 2011. Its director, Tikoy Aguiluz, earlier protested the inclusion of his name in the film’s credits and promotional materials. He said “Asiong” had been reshot, reedited and rescored without his knowledge—and thus it should not be attributed to him.

FAP director general Leo Martinez said he was glad that Estregan, Scenema producer Maylyn Villalon and some members of the cast were present to accept the awards.

Best director and best actress awards went to Paul Soriano and Maja Salvador, respectively, for their work on the inspirational family drama “Thelma”—about a girl from Ilocos who discovers her unusual skill as a runner and uses it to free her family from poverty.

Lovi Poe was declared best supporting actress for her performance as the conflicted wife in the Jun Lana drama, “Yesterday, Today and Tomorrow.” 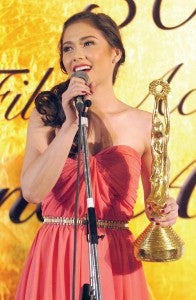 A number of special awards were given during the ceremony hosted by Rez Cortez and Katya Santos. The Golden Reel Award was posthumously given to the late comedy king Dolphy.