Local fans of blues music and its derivative styles have reason to rejoice. Blues rock singer-songwriter Joe Bonamassa, who has collaborated with the likes of B.B. King, Buddy Guy, Eric Clapton and other legendary artists, is performing on September 25, 8 p.m., at One Esplanade, SM Mall of Asia complex, Pasay City.

The event was formally announced during a recent media gathering at the newly opened club, The Roadhouse Manila Bay at the MoA complex, whose owner, Ciaran Carruthers, is also the promoter of the Bonamassa concert.

“Joe Bonamassa is the best blues musician in the world right now,” Carruthers said when interviewed onstage by Filipino musician Francis Reyes, who was program host. Carruthers, an Irishman married to a Filipina, also owns The Roadhouse Macau.

Bonamassa, born and raised in New Hartford, New York, held his first guitar— a gift from his father—at age 4. 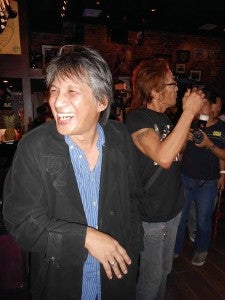 He was only 7 years old when he started playing Stevie Ray Vaughan and Jimi Hendrix tunes note-for-note.

At age 11, he learned to play country and jazz as well as polka. A year later, he opened for B.B. King.

When he was 14, he was invited to a Fender guitar event in the West Coast. On that trip, he met Berry Oakley Jr. (son of The Allman Brothers Band’s original bassist), with whom he founded Bloodline, along with Miles Davis’ son Erin and Robby Krieger’s (The Doors) son Waylon.

As a solo artist, Bonamassa has released 10 studio albums, seven of which have topped the US blues charts, including his latest record, “Driving Towards the Daylight,” which came out in May. 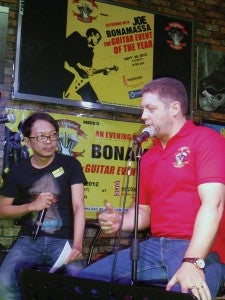 At the announcement of the Joe Bonamassa concert in Manila, promoter Ciaran Carruthers (right) is interviewed by the event’s host, guitarist Francis Reyes.

In an interview with Guitarist magazine, he cited four albums that had the biggest influence on his playing: John Mayall & the Bluesbreakers with Eric Clapton (the “Beano” album), Rory Gallagher’s “Irish Tour,” Cream’s “Goodbye” and Stevie Ray Vaughan’s “Texas Flood.”

In the same interview, Bonamassa elaborated on his influences:

“My heroes were Paul Kossoff, Peter Green, Eric Clapton…there are so many… Gary Moore, Rory Gallagher—another Irish musician who played the same things, but don’t tell him that… Jeff Beck and Jimmy Page. There’s a certain sophistication to their approach to the blues that I really like, more than the American blues that I was listening to. B.B. King’s a big influence—he’s probably my biggest traditional influence. I love Muddy Waters, Robert Johnson and T-Bone Walker and stuff like that, but I couldn’t sit down… I was always forcing myself to listen to whole records by them, where I’d rather listen to Humble Pie do “I’m Ready.” 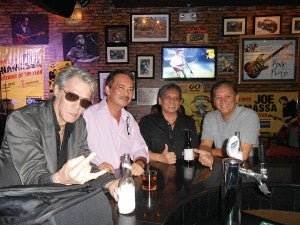 Resty Fabunan, leader of the revitalized Maria Cafra, wore a Jimi Hendrix T-shirt and a smile on his face.

Looking happy as well were ace guitarist Jun Lopito and balikbayan Pinoy rock star Gary Perez—both of whom once shared the stage as members of Sampaguita’s band, the Edmund Fortuno-led Anak Bayan.

All of these blues enthusiasts are expected to watch the Bonamassa show.

Meanwhile, PBS launched the 1st Philippine Blues Competition—open to all Pinoy blues bands—whose winner will represent the country at the International Blues Challenge (IBC) in 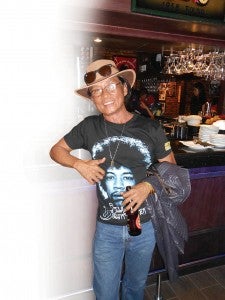 The IBC, now on its 29th year, will gather blues musicians from 30 countries.

Elimination rounds will be held at Roadhouse Manila Bay on September 1, 8, 15 and 22. Each of the weekly winners (top four bands) will advance to the semifinals to be staged at the same venue.

Finals is on September 28 at the Alpha Tents in Makati.

Read Next
Jazz for all seasons
EDITORS' PICK
Leveling up your ‘lutong bahay’ with the kitchen companion you never knew you needed
SM prepares for ‘safe malling’
Notice of 2020 regular meeting of stockholders June 18, 2020
LIST: What to expect in areas under GCQ, MGCQ
Drilon wants repeal of penal provisions in proposed Bayanihan extension law
DOTr bares 2 phases of public transport revival in GCQ areas
MOST READ
LIST: What to expect in areas under GCQ, MGCQ
Hong Kong loses US ‘special status’ — what next?
Duterte approves Metro Manila’s shift to GCQ starting June 1
Bocaue Mayor Joni Villanueva passes away, Sen. Villanueva confirms
Follow @Inq_Lifestyle on Twitter
Don't miss out on the latest news and information.