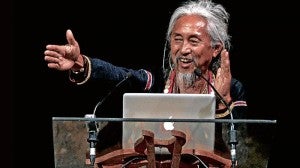 AT THE CCP: “Ay Apo … May Shooting ng BambooCam”

Not even howling winds and incessant rains could stop indie filmmaker Kidlat Tahimik from donning his bahag (g-string) and leading a “ritual” to inaugurate an exhibit of his art installation, dubbed “Ay Apo … May Shooting ng BambooCam” at the Cultural Center of the Philippines recently.

Announced during the occasion was his latest achievement—winning the Fukuoka Prize for Arts and Culture.

Japanese Ambassador Toshinao Urabe said the city of Fukuoka bestowed the honor annually on an “outstanding” artist. In his speech, Urabe said Tahimik’s love for, and pride in, Filipino indigenous culture was “the solid root on which he has developed his diverse and unique art form.”

In his acceptance speech, the internationally-acclaimed, Baguio-based filmmaker shared the honor with his mentors, theater stalwart Amelia Lapeña-Bonifacio and Ifugao carver Lopez Nauyac, who were present at the event. 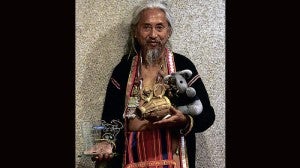 KIDLAT with PDI citation and a Guyito

He planned to bring some of the art works to Fukuoka for the awarding ceremony on Sept. 13, Tahimik said.

He also screened his unfinished movie, “Ang Balikbayan (Memories of Overdevelopment)”—a retelling of the adventures of Enrique of Malacca, Portuguese explorer Ferdinand Magellan’s slave and “the first man to circumnavigate the world.”

Tahimik plays Enrique in the film. They started filming 30 years ago, he recalled.

“We can’t finish the movie because one of our lead stars, George Steinberg, who portrayed Magellan, has died,” said photographer Wig Tysman who plays Pigafetta.

Tysman likewise attended the exhibit inauguration, along with the movie’s cinematographer, Boy Yñiguez. The film showing inspired the two to reminisce about the shoot, which spanned part of the 1980s and ’90s.

They said the cast, composed mostly of Baguio-based artists and expats, gladly acted in the film gratis et amore.

“We shot the Battle of Mactan in Poro Point, La Union,” Yñiguez recounted.

“We shot Magellan’s horseback scenes in Wright Park in Baguio,” Tysman added. “The gazebo [in the film] is no longer there; it was destroyed during the 1990 earthquake.”

With the Fukuoka cash prize (3 million yen, or about P1.6 million), will Tahimik finally get to finish the epic?

“I hope to continue my project in Hapao, Ifugao,” the filmmaker said. “I want to document on video the oral traditions, the disappearing culture, of the elders so that we can pass them on to younger generations.” In the future, these videos can be presented to high school students, he said.

Hapao is the village where he planned to retire, Tahimik said. “I have a hut, an abong, there.”

Previous Filipino winners of the Fukuoka were architect Leandro Locsin and filmmaker Marilou Diaz-Abaya. Renowned filmmakers Akira Kurosawa (of Japan) and Hou Hsiao Hsien (of Taiwan) were Fukuoka honorees in the past as well.

Tahimik was among the pioneering filmmakers honored at the 2nd Inquirer Indie Tribute last December.