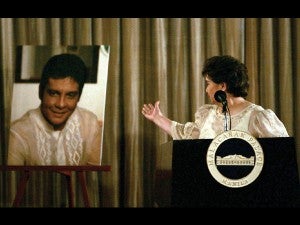 FPJ NATIONAL ARTIST Susan Roces gestures toward a large photo of her late husband Fernando Poe Jr. at the conferment of the national artist award, posthumous, on the movie actor and presidential candidate on Thursday by, says his widow “a duly elected President,” President Aquino. LYN RILLON

“It’s worth waiting for… to be conferred by a duly elected President,’’ said Roces, who had accused then President Gloria Macapagal-Arroyo of stealing the vote from her husband in the May 2004 presidential elections. “This is not tainted by politics.’’

Roces said the award is a rare honor that everyone in the industry prays for and dreams about getting some day.

Arroyo set the conferment of the award on Poe in May 2006, but his family skipped the event in protest of Poe’s loss to Arroyo in 2004. Poe, then opposition standard-bearer, lost to Arroyo by about a million votes following alleged rigging of the results.

On July 20 this year, Mr. Aquino issued Proclamation No. 435 confirming the May 23, 2006, Proclamation No. 1069 that declared Poe as National Artist, opening the door for the posthumous conferment.

Llamanzares, chairperson of the Movie and Television Review and Classification Board, said they had patiently waited for this day.

“This victory is sweeter because we’ve waited for the right time,’’ she said, “What better way to honor a man than to have the award conferred by a person that the Filipino people hold in such high esteem.”

Llamanzares said if there was any lesson that could be learned from her father, it’s that “we have the power to write the screenplays of our lives. We can be good parents, great Filipinos, and above all, citizens that are true to ourselves and responsible to our futures.’’

In formal rites witnessed by National Artists Eddie Romero, Virgilio Almario, Napoleon Abueva and Abdul Mari Imao, officials of the Cultural Center of the Philippines and the National Commission on Culture and the Arts paid tribute to the actor, born Ronald Allan Kelly Poe.

Poe is the sixth filmmaker to be conferred the National Artist award. Like Avellana, De Leon, Brocka, Bernal and Romero, he was also a director, CCP chairperson Emily Abrera noted in her speech.

“But he’s better known as an actor. And we can say he’s probably the most famous Filipino action star. Until now, his films are still shown. Who hasn’t seen his movies ‘Panday,’ ‘Alupihang Dagat,’ ‘Ang Agila at ang Araw’ and numerous other films that now form part of the Filipino culture?’’ she said.

“Each one of us is looking for a hero who will remind us that there is hope, and no matter how difficult our life is, a new tomorrow comes. That is what FPJ has shown,’’ she said.

The President said Poe lived by national hero Jose Rizal’s principle that there’s no meaning in one’s life unless it’s lived for a noble purpose.

“He was loved and adored by many because of his good acting skills, his respect for fellow artists and his films that mirrored the life of ordinary people. While he has reaped many accolades, he remained grounded,’’ he said.

Hero of the masses

Mr. Aquino said the award was set to be conferred in 2006, but said Roces should not be faulted for deciding to defer the family’s acceptance of the award.

“Like all the characters he portrayed, from being ‘Ang Probinsyano’ to his becoming ‘Eseng ng Tondo’; from his struggles in ‘Alamat ng Lawin’ to being a defender in ‘Ang Panday,’ he is a hero to the Filipino masses,” he said.

“With this award,’’ Mr. Aquino said, “we hope that thousands more like him will rise and use their talents to lift up the lives of their fellow Filipinos.’’

“Whoever in the coming generations will ask who is FPJ, we will answer them with one voice: He’s the king of Philippine cinema, a national artist who will continue to be part of the lights, camera, action in the life of the whole country,’’ he said.

Senator Loren Legarda, Poe’s running mate in 2004, congratulated Roces and Poe-Llamanzares on the conferment of the award.