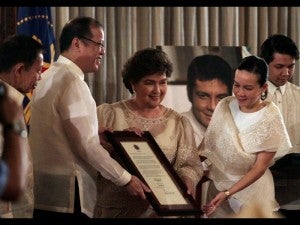 Roces refused to accept the posthumous award during a conferment ceremony at Malacañang in June 2006, during the incumbency of then-President Gloria Macapagal-Arroyo.

Poe ran against Arroyo in the 2004 presidential elections, the results of which were questioned by FPJ before he passed away on December 14, 2004.

The Order of National Artists (Orden ng Gawad Pambansang Alagad ng Sining) is the highest national recognition given to Filipino individuals who made significant contributions to the development of Philippines arts; namely, Music, Dance, Theater, Visual Arts, Literature, Film and Broadcast Arts, and Architecture and Allied Arts. The order is jointly administered by the National Commission for Culture and the Arts (NCCA) and Cultural Center of the Philippines (CCP).

In his speech, Aquino paid tribute to Poe’s contribution not only to Philippine Cinema but his service to the Filipino people.

He gave credit to Poe’s portrayal of ordinary Filipinos who refuse to succumbe to tyranny.

He described Poe as someone who tried his best to get out of his comfort zone in the film industry and joined public service when he ran for the presidency in 2004, a controversial election that many believed he won over Gloria Macapagal-Arroyo. Totel V. de Jesus